The season premiered last night and everyone was watching. Including people who don’t. 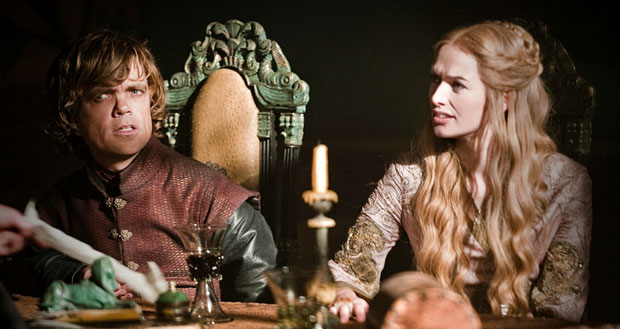 We were planning on bringing you a detailed and analytical breakdown of the season premiere of Game of Thrones today, however all of our editors are out “sick” with what are most likely Easter-related hangovers. So, as someone who has seen precisely 60 minutes of the show (luckily, it was last night’s 60 minutes!), I feel as qualified as any to bring you this recap. Off to Narnia or whatever!

The episode starts with the sounds of an epic battle. We don’t get to see an epic battle, but it’s ok; we’re only 5 seconds in and expectations are bargain basement. This is followed by a man who resembles a giant baby crying like the giant baby he is when he finds his brother holding his own head (which is not attached). If the new season of Mad Men doesn’t start like this, they are truly missing an opportunity.
The big baby is then attacked by a zombie or something before being saved and ultimately reamed out by an old guy for not “sending the ravens,” which this baby-fool, of course, did not. I assume this means that baby-man forgot to put the old man’s money on the Super Bowl – Joe Flacco burns another one. Meanwhile, where’s all this nudity I’ve been hearing about?
We then cut to a camp where a bunch of un-nude people and a giant hang out and do the kinds of thing you do in a camp. There is a guy who they keep referring to as “a crow” who is totally cos-played out as a crow. This is cool in a very ’90s sort of way. He is being ushered around by a lady and a guy known as the “Lord of Bones” who is covered with bones, and is by far the coolest thing that has happened on this show ever.
Some Queen is now paying a visit to her brother, and there seems to be a significant amount of sibling rivalry. However, he is a little person who lives in a dark room and has a sliced up face, and she is the Queen – so someone is clearly coming out ahead here. They talk for a while about who is narc-ing on who with Daddy and I wonder when the Lord of Bones is coming back.
We’re brought to an island where a dude is stranded. He is tired and looks like I do when I put my pasty-white face in the sun for longer than 16 seconds. He’s rescued by a friend who self-describes as a pirate, although I maintain the belief that if you call yourself a pirate, you are probably not one. They talk about their dead sons for a while and I drink more beer.
Little two-face has a meeting with dad that doesn’t go so well. His family really doesn’t like him. Probably because he’s such a narc.Now there’s two ladies playing a game where they make up stories about the ships in the water. Obviously, they didn’t have Xbox in these times. One of them is a know-it-all and the other is whining because the know-it-all won’t play her dumb game by her dumb rules, I don’t want to hang out with either of them. I’m starting to wonder if the Lord of Bones will ever come back.
It seems that Emilia Clarke has pet dragons that grill fish in midair, which, I assume, are the two reasons why everyone watches this show.
We cut to some big dudes carrying a little boy in a box. This little boy has a stink face and one can only assume he doesn’t suffer fools gladly. A young lady and fellow box-traveler block stink-face’s way in the middle of the part of town that is full of dirty people. Stink-face could not be angrier. Apparently, this wasn’t in the box-travel traffic report this morning.
I’m being told that this little boy is a king. What he is king of is not clear. Being shitty to his parents? Emoticons? Not using a fork? He has an uncomfortable dinner with the lady who impeded his box travel.
There is now a slave-army-salesman trying sell his slave army to Emilia Clarke by cutting off a soldier’s nipple in front of her and then justifying it by saying “men don’t need them.” He’s not a very good salesman. Also, these are not the sort of nipples I was promised when I was told to tune in.
The episode ends with a demon child trying to close the book on Emilia, but the lass gets foiled by a man who dramatically reveals his bowl cut and then bows to her. This may or may not be very exciting.
Overall, I would give this episode a B. That’s B for “Bones,” as in the Lord of.The creator of the Dothraki language gives you a tutorial.Or, just check out these gorgeous Girls on Thrones.