Gary Oldman Is Turning 60, So Revisit His 10 Best Roles of All Time 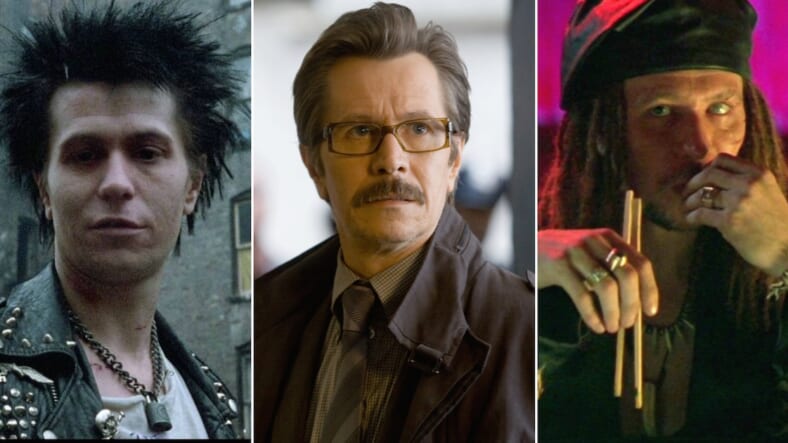 Gary Oldman finally joined the hall of acting greats when he was awarded a Best Actor Oscar for his portrayal of Winston Churchill in Darkest Hour.

It was moment many say was long overdue, even if it was only Oldman’s second nomination. His first came in 2011 for the Cold War-era thriller Tinker Tailor Soldier Spy, although his status as a legend of stage and cinema long predates that.

His earliest success came in the early 1980s, when he joined the Royal Shakespeare Company. Theater renown and a cult classic role in Sid and Nancy parlayed into a career as one of Hollywood’s greatest villains in the 1990s, in movies like True Romance and The Fifth Element.

Oldman finally achieved superstardom in the new millennium for playing Sirius Black in the Harry Potter series and Commissioner Gordon in The Dark Knight Trilogy. His range is second to none.

As the acclaimed character actor turns 60, revisit his 10 most iconic roles of all time:

Sorry Chris Tucker, but the greatest character with the weirdest hairdo of The Fifth Element goes to Oldman’s Jean-Baptiste Zorg. As the owner of weapons manufacturer Zorg Industries, Oldman was a garish embodiment of greed, excess and cruelty. It is his wackiest role—and haircut—to date.

Apart from The Dark Knight Trilogy, Gary Oldman has favored complicated characters over Hollywood spectacle. One of his earliest forays into blockbusters came in the Harrison Ford-led heist movie Air Force One, where Oldman gave a shoot-em-up flick and actually scary villain. Rolling Stone described his work as a Russian terrorist as “oozing menace.”

As silly as it might be, Count Dracula is perhaps the best-known villain of pop-culture lore. That Oldman was cast as Dracula in Francis Ford Coppola’s lukewarmly-received horror movie is testament to his ’90s hot streak of playing baddies. His performance was praised while that of Keanu Reeves’s flailing British accent was panned and remains an embarrassment for the actor.

Oldman proved his ability to act in any accent imaginable, the mark of a truly great actor, in New York-set crime noir as Jackie Flannery, a fiercely loyal but horrifically cruel Irish-American gangster.

“With his greasy hair, wild eyes and cackling laugh, Jackie’s simultaneously charismatic and terrifying – the kind of character who can be drinking at a bar one minute and shooting the place up the next,” wrote Den of Geek, which declared it Oldman’s finest performance. “Even when placed next to, say, Joe Pesci’s volatile performance as Tommy DeVito in Goodfellas, Jackie’s a fearsome creation.”

Before he played it bad as Jean-Baptiste Zorg, Oldman was the downright psychopathic Norman Stansfield of The Fifth Element director Luc Besson’s thriller The Professional. The New York Times described the role as a “fantastically corrupt drug-enforcement agent” and wrote that Oldman “expresses most of the film’s sadism as well as many of its misguidedly poetic sentiments.”

Cult movie lovers claim this to be the first great performance of Gary Oldman’s film career. He plays the hard-living Sid Vicious of the seminal punk band Sex Pistols. He made Vicious’s self-destructive habits and brilliantly crass banter with girlfriend Nancy Spungen, played by Chloe Webb, a dark joy to watch. Who can forget him saying, “Y’know, I was so bored once that I fucked a dog.”

The Academy favors transformative roles, and they awarded Oldman his long-overdue Oscar for appearing unrecognizable as former British Prime Minister Winston Churchill in Darkest Hour. But the acting underneath that prosthetic double chin and receding hairline is the work of a great.

It is ironic that a man who made his name playing over-the-top villains is perhaps best known for playing one of the few good guys of The Dark Knight Trilogy, Commissioner Gordon. He brought an edge—and a badass mustache—to a usually straight-laced right-hand man.

His time in the Quentin Tarantino-scripted crime comedy is brief, but Oldman’s performance is iconic for just how committed he is to it. Playing Drexl Spivey, a dreadlocked drug dealer trying to “act black,” Oldman gave what could have been a silly caricature some major gravitas. “You musta thought it was white boy day” remains one of the most quotable pieces of dialogue in a movie that’s full of them.