The Starks will be there, but no Lannisters. 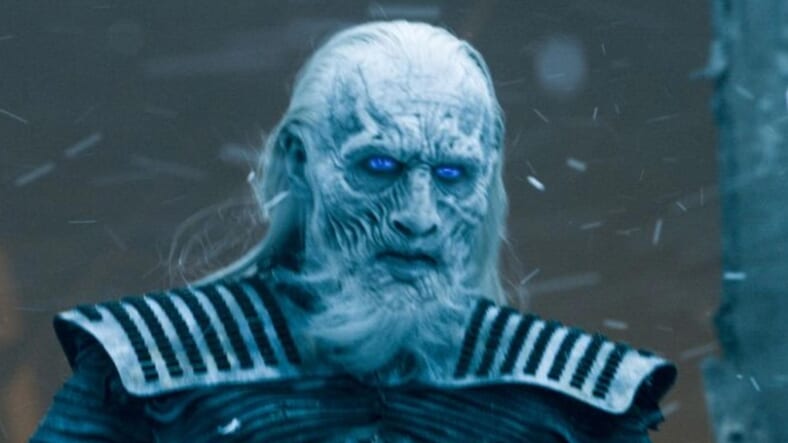 George R.R. Martin originally created the story of Game of Thrones, so he can pretty much say whatever he likes about the show and its prequel—possibly titled Blood Moon—and he has. Most recently in an interview with Entertainment Tonight, where he revealed intriguing details about the new series.

Basic facts from the interview reveal that some familiar family names are indeed found in the prequel, set thousands of years before the events in Thrones, and familiar villains as well.

One interesting wrinkle: centuries before the events that led to the destruction of the White Walkers and the melting of the Iron Throne, there weren’t just seven kingdoms. There were many, many more.

Could get confusing. Less confusing for eager fans following up after Thrones—the Starks are around, as are direwolves. Martin told ET that the Stark family “will definitely be there” and “obviously the White Walkers are here…”

Even cooler: “There are things like direwolves and mammoths.”

Here’s the curve ball, though: No Lannisters. Not at first. From ET:

The prequel predates the rise of the Lannister family, Martin says. But there is another family currently residing in the future Lannister homestead. “The Lannisters aren’t there yet, but Castlery Rock is certainly there; it’s like the Rock of Gibraltar,” he says.

“It’s actually occupied by the Casterlys — for whom it’s still named after in the time of Game of Thrones.” The Casterlys were supposedly swindled from their homestead by Lann the Clever — who founded House Lannister — though it’s unclear if this tale will be told in the prequel.

There might not be room for breakout stars in Blood Moon, or whatever it’s finally called (see what Martin favors below). The author is hesitant to refer to any of the known stars—Naomi Watts, Naomi Ackie, and Denise Goughs—as “leads.”

“I hesitate to use the word ‘lead,’” he tells ET, “As you know for Game of Thrones, we never even nominated anybody for lead actress or lead actor until recently; it was always for supporting because the show is such an ensemble. I think that will be true for this show too. We don’t have leads so much as a large ensemble cast.”

And about the title? More from Entertainment Tonight:

The prequel is still officially untitled, Martin emphasizes. In the past, the author has suggested the title The Long Night. One behind-the-scenes factor that complicated this choice is that the third episode of Game of Thrones season 8 is also titled “The Long Night.”

While The Long Night remains Martin’s preferred title, there is another similar possibility being considered. “I heard a suggestion that it could be called The Longest Night, which is a variant I wouldn’t mind,” he says. “That would be pretty good.”

Honestly, Long or Longest Night is kind of dull. But who wouldn’t want to tell friends they’re going home to binge on Blood Moon?

All these things will likely change over time. We’ll find out for sure when the prequel premieres sometime in 2021.