Check out this teaser video of the upcoming “Ghostbusters” reboot. 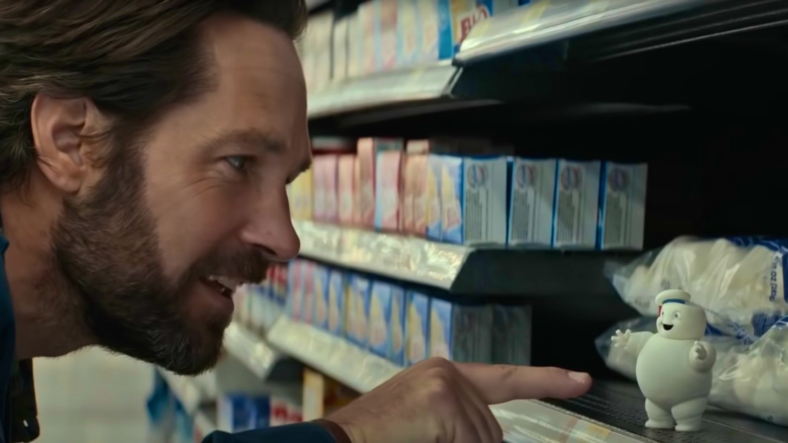 Ghostbusters: Afterlife, directed by original movie director Ivan Reitman’s son Jason, is one of the many 2020 movies that saw delayed release thanks to the coronavirus pandemic. It was so delayed we forgot it had been made—until Sony Pictures released the weird and funny clip above, re-introducing the idea of possessed marshmallow men into the Ghostbusters fictional universe.

Only this time, the monsters are tiny, and they bite.

Mr. Stay Puft, the giant cursed marshmallow brand mascot, was first introduced in 1984’s Ghostbusters. In the clip above, Paul Rudd is on a casual shopping trip in an unnamed department store when he notices a bag of marshmallows behaving strangely.

Realizing marshmallows shouldn’t behave, much less move at all, Rudd’s character investigates only to see a tiny Mr. Stay Puft pop out and greet him—adorably.

Until, that is, the tries to poke its belly. That’s when he finds out these creepy marshmallows have teeth. It gets weirder from there.

Here’s the synopsis for Ghostbusters: Afterlife:

From director Jason Reitman and producer Ivan Reitman, comes the next chapter in the original Ghostbusters universe. In Ghostbusters: Afterlife, when a single mom and her two kids arrive in a small town, they begin to discover their connection to the original ghostbusters and the secret legacy their grandfather left behind. The film is written by Jason Reitman & Gil Kenan.

The movie was originally going to premiere in the Fall of 2020.