These special forces-inspired smokes are just in time for Memorial Day. 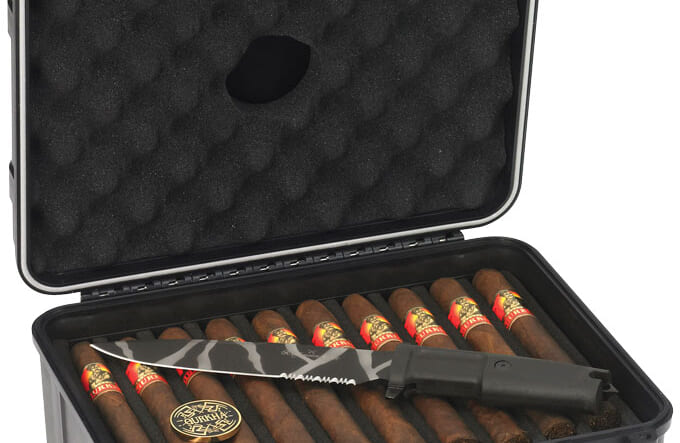 Lots of people say they appreciate our armed forces on Memorial Day. Gurkha Cigars is actually doing something to show it. To celebrate America’s special forces, the stogie factory is giving away 100 special ops cigar sets to elite troops serving overseas in combat and other danger zones.

In addition to 20 limited edition Sniper cigars qualified officers will receive a combat knife and a challenge coin in a Pelican-style waterproof cigar case that doubles as a portable humidor.

Gurkha is teaming up with tacticalshit.com, a special forces website, on the “Smoke ‘Em After You Smoke ‘Em” promotion. Qualified soldiers under SOCOM (Special Operations Community) include Navy Seals, Green Berets, MARSOC Marines, CIA Global Response Staff, Army Rangers, Airforce PJs and other units that officially “don’t exist”. Starting on May 26th, the sets will be released on a first come, first serve basis to vetted applicants and must be shipped to FPO/AP “in harm’s way.”

The Sniper cigar is a medium-to full-bodied cigar with a Dominican wrapper, Indonesian binder and Dominican/Nicaraguan filler. It’s 7.5 inches long with a ring gauge of 52. Luckily civilians can buy a box of 20 for $250.

Cause no matter what you’re celebrating, there’s nothing like a smoke after winning a skirmish on the battlefield of life.