“My daughter is perfectly safe,” says the dad who shot it. 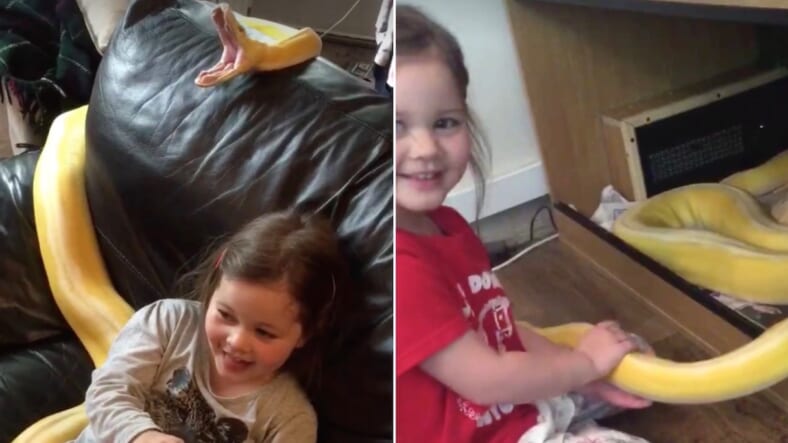 Children love their pets… even when those pets are 12-foot long Burmese pythons.

Several Facebook videos have been making the rounds showing an adorable young girl cuddling with the famously lethal snake breed, known for feasting on small mammals and even swallowing grown men whole.

The man who posted the videos, Ed Taoka, purports to be the girl’s father and defended letting her near the python, which could potentially coil around her small body and crush her.

My daughter is perfectly safe. Interaction with any animal and child must always be supervised.No, it is not sizing her up. That is a stupid myth.Neither snakes have any desire to bite or eat us.Do you know what this snake loves to eat? Rats. She loves rats. Won’t eat anything else. For the love of god I have tried rabbit but she is a really fussy madam. She just eats defrosted rats.

No we have never been bitten.

These are tame (by dictionary definition), captive bred, pet snakes. They have been handled nearly everyday – multiple times a day since they were babies.There are more dangerous issues with other animals such as dogs and horses to children than non-venomous snakes.Snakes, like other animals are also allowed to ‘yawn’.

The freakiest part of the videos: the pet python is named “Cher.”