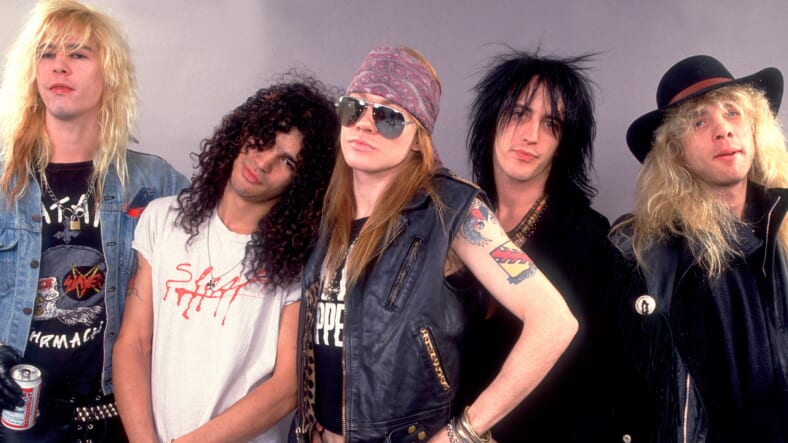 Guns N’ Roses is commemorating the 31st anniversary of their best-known album with a deluxe reissue of Appetite for Destruction featuring 49 previously unheard songs.

The expanded “Locked N’ Loaded” box set hasn’t officially been unveiled, but the rockers’ website directs to a landing page with a countdown clock set to terminate April 3 at 9 PM.

As Metal Injection notes, the skeletonized caricatures of the original lineup—Axl Rose, Slash, Duff McKagan, Izzy Stradlin and Steven Adler—featured on Destruction’s album cover are currently scrolling to the driving beat of the GNR deep cut “Shadow of Your Love.”

Fortunately for superfans, a leaked unboxing video prematurely revealed what appears to be a cavalcade of CDs, vinyl, art and other memorabilia.

Consequence of Sound has the full breakdown of its apparent contents:

A total of 73 tracks (49 of which are unreleased) are spread out across four CDs and seven 12-inch 180-gram LPs. The original album has been remastered from the original analog tapes and will be presented across two LPs.Also included are a pressing of 1986’s Live ?!*@ Like a Suicide EP, a second EP containing B-sides from the era, and 25 unreleased recordings from the band’s 1986 Sound City sessions and two unreleased tracks from their sessions with producer Mike Clink.The super deluxe version also boasts a 96-page handbound book with unreleased photos from Axl Rose’s personal archive, 12 new illustration lithos visualizing each song from Appetite For Destruction, and replica memorabilia from the era.

Rose, Slash and McKagan will set out on the 9th leg of their “Not in This Lifetime” reunion tour with other non-original members on June 3. Hopefully Adler and Stradlin will fill out GNR’s classic lineup at an upcoming show.

If you’re not planning on headbanging your way through Europe, enjoy these great tracks from Appetite for Destruction instead.