Todd Hoffman from ‘Gold Rush’ On God, Gold and Growing a Badass Beard 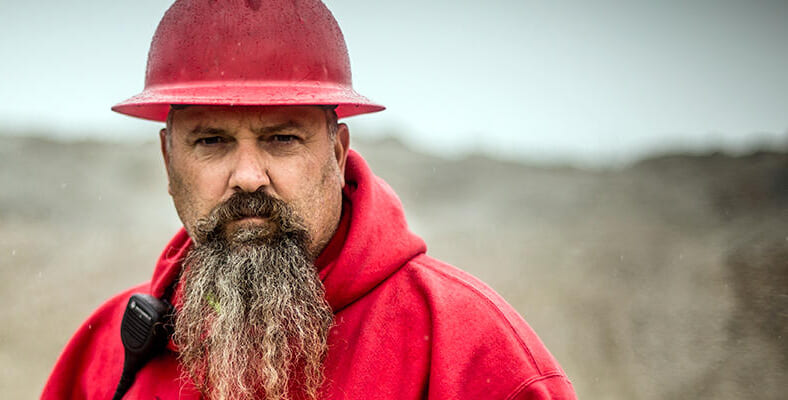 As a star of Discovery Channel’s Gold Rush, currently in its 7th season, Todd Hoffman and his family have had their profitable highs and devastating lows broadcast to the world. They’ve hit the motherlode in Alaska, gone bust in South America, and found themselves in unfamiliar territory with a shift to Oregon for the current season. We caught up with the gold miner/reality star to talk about the realities of gold mining on TV, the impact of fame on his life, and his public feud with co-star and rival Parker Schnabel.

This season saw the Hoffman clan move your operation to Oregon. What was the rationale for the move? Was it for better ground, a longer mining season…?

First, what we wanted to do was get back in the United States and spend money in the U.S. We also wanted to find a location that had good gold and was close to home. We tested the ground and that’s why we picked Oregon.

How serious is your rivalry with, or dislike for, Parker and his crew? Is it real or just for TV?

There is a genuine dislike there. But there is a mutual respect at least on my end. But I don’t like seeing people be disrespected that are older than him. If I see it happen, I say something about it.

Granted you’re working for much of the year in remote locations, but how has being a reality television star impacted your life? Do you have any funny or interesting stories based on your fame?

You either get better prices on things or worse. Sometimes it helps you and sometimes it hurts you. If you’re building a house, sometimes a contractor will charge more. Or sometimes if you’re buying something, and they love the show, they’ll give a good discount. I never wanted to be famous but it does give access and opportunities. For me, I always try to take an opportunity to talk to people and maybe get to talk about my faith. Not that I’m a poster boy for the Christian faith. I’m a work in progress.

Meet anyone cool who watches the show?

I heard that Kevin Spacey’s favorite show is Gold Rush. I saw Dr. Phil and he said “Hi Todd.” Hulk Hogan watches it. A lot of dudes watch it.

Have you gotten used to having cameras in your face at all times? Does the filming ever get in the way of the mining?

Filming does slow you down a little, but you just got to factor that in. We’ve done it so many years, that it isn’t too bad. The crew is mostly British or Irish, and they’ve become family. We realize they’re trying to do a job and we’re just trying to mine. In between there is something awesome and that’s why our ratings are so big. Because men want to believe the American dream is still out there and alive. And that’s one of the reasons why I moved back to the U.S.

What advice would you give to someone who watches the show and wants to gold mine themselves?

Get educated and get a job and go work for one summer at a gold mine. Then go make the decision. Don’t make a big investment until you work a gold mine.

How do you spend the offseason?

Trying to catch up on all the things around the house. Try to go on a few trips to Disneyland. I have some trucks that I restore with my dad. Also, I do all kinds of other things with kids.

What’s the best part of the life of a gold miner?

You’re mining gold with your best friends. It’s awesome just getting to mine with my buddies and seeing them every day.

And the worst part?

When you don’t get gold and you’re losing money. It’s no fun to lose money with your best friends.

How tough is living in confined spaces with a bunch of dirty guys for months at a time? Who’s the worst crew member to share a camp with?

I had to write up a guy this year because of his attitude. There’s something coming that we’re not proud of, something violent. And that’s not easy. Sometimes I don’t know how to deal with it right. And that’s all I can say right now because it hasn’t played out yet.

Is there any partying or other shenanigans at the mine site? Any funny stories you can tell us?

No, not really at our camp. I’m sure at the other camps. Nobody wakes up with their underwear on their head. We’re pretty exhausted by the end of the day.

What’s the most popular adult beverage at the Hoffman site? Is it a beer or liquor crew?

I don’t drink, but I think the other dudes drink Crown Royal.

Any good tips for maintaining such an impressive beard? Any grooming tips for fellow bearded men?

I’ve tried everything that is known to man for the beard. The best thing is to condition it. Or you can use a little bit of coconut oil in it. Everything else makes it nasty or greasy. If you’re looking for beauty tips on a beard, you might want to look elsewhere. I’m kind of a train wreck.