How Usain Bolt Is Racing to Make History

The world’s fastest man is hoping to heal from a hamstring injury in time to prove he’s the greatest sprinter ever–and win another gold medal at the Rio Olympics. 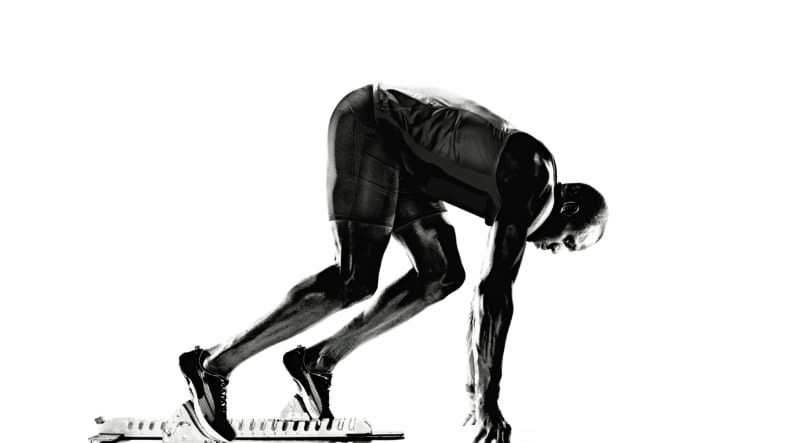 As a kid growing up in the tiny Jamaican village of Sherwood Content, which offers little in the way of traffic lights or reliable running water, it was the game of cricket, not track, that became Usain Bolt’s first love. Early in the morning he’d watch the sport live on TV with his father, huddled around a tiny set in his bedroom, then spend hours on the cricket pitch after school. So when Bolt’s high school cricket coach broke the news to him early on that his preternatural speed might be better suited for the track, it took some convincing, and long talks with his father, for Bolt to put aside his dreams of cricket glory and give running a shot.

He was unusually tall for a sprinter—eventually landing at 6’5″—and it meant he wasn’t able to generate the short, quick strides needed for a speedy start. But once Bolt cleared the blocks, his rare combination of stride length and leg strength proved to be a secret weapon. Where other sprinters might need 44 steps to complete the 100 meters, Bolt required just 41, making the distance, in effect, shorter for him. With the help of his high school track coach, Pablo McNeil, who also happened to be a former Jamaican Olympic sprinter, the tall kid from Sherwood Content soon began to stand out on the local circuit.

By the time he got to the 2001 Carifta Games, an all-Caribbean track-and-field competition that’s historically served as a breeding ground for Olympic hopefuls, the rest of the world started taking notice, too. Before the race, Bolt says, he was nervous as hell. “It was my first time representing my country.” But when it was over, the then 14-year-old came away with a pair of silver medals and, perhaps more important, the confidence that he could one day run faster than any other human in history.

With each new competition he entered and inevitably won—the 2002 World Junior Championships 200-meter, the 2003 Pan American Junior Championships 200-meter—the buzz surrounding Bolt only grew louder. Then, at age 21, after battling through a series of injuries and setbacks, he set the world record in the 100 meters with a time of 9.72 seconds at the 2008 Reebok Grand Prix in New York.

Over the next seven years, he went on to win 11 world championships and six Olympic gold medals, setting the current world records in both the 100-meter (9.58 seconds) and 200-meter dashes (19.19 seconds). He was also named the Laureus World Sportsman of the Year three times, an esteemed award that Tiger Woods, by comparison, has only won twice. As the four-time Olympic gold-medal sprinter Michael Johnson put it, “It would be difficult for most athletes to dominate for as long as Bolt has, but it isn’t so much for him because he’s so much better than everyone else. He’s the best that’s ever been.”

This summer, the 29-year-old phenomenon will represent Jamaica in his fourth Olympic Games, setting his sights on a historic, unprecedented and, until now, seemingly impossible three-peat: winning gold in the 100-meter sprint, the 200-meter sprint, and the 4 x 100-meter relay, precisely as he did in 2008 and 2012. He also hopes to run the 200 in under 19 seconds, a coup that no competitor in history has been able to touch. Should he succeed, the feat wouldn’t just earn Bolt a spot in the record books; it would guarantee him sports immortality. Of course, that’s if he can recover from an unfortunate hamstring injury in time to make history yet again.

Sitting back in his chair in an opulent Upper East Side hotel suite weeks ago, Bolt seems well aware of what’s at stake. “The Rio Games are going to be my legacy,” he says with some well-earned swagger, dressed in an all-black ensemble that doesn’t include shoes and seems decidedly understated for an international megastar who goes by the moniker Lightning Bolt, until you notice the watch wrapped around his left wrist.

Named the Big Bang Unico Usain Bolt, it’s not just any watch; it’s an 18k-gold head-turner, with 38 jewels, a Jamaican-flag strap, and a second hand in the shape of—what else?—a lightning bolt. The unique timepiece is a product of Bolt’s second collaboration with the luxury Swiss brand Hublot. (He also helped design the first, a watch with a strap made from the same material as his spikes.) “I told the people at Hublot I wanted this one to pop,” he says, gesturing at the $42,200 in hardware on his wrist. “Only 100 will be made available to the public.”

Hublot is just one of a deep roster of brands, including Puma, Gatorade, Digicel, Regupol, Virgin Media, Nissan and Celcom, that put a reported $21 million in Bolt’s pocket last year. The figure starts to sound even more impressive when you consider that this is an athlete who, if you do the math, spent about 7 minutes actually competing in 2015. Still, sprinting as a full-time job takes its toll on a body, and Bolt has been doing it for more than half his life. These days, he admits that even when he’s healthy he feels his age. “Sometimes I wake up in the morning and I’m like, Ugh, I have to do this again?”

In preparation for the most important moment in his career, Bolt has been working with longtime coach and mentor Glen Mills to optimize his training and design a smarter, more efficient routine. That means a combination of science—using a high-tech Tecar machine to flush out lactic acid—and common sense. “I start training when the sun is lower,” says Bolt, describing his remedy to beat the Jamaican heat. “It’s the little things you figure out as you get older.”

Bolt’s most formidable obstacle in Rio won’t be sore muscles but Brooklyn-born sprinter Justin Gatlin. The 34-year-old won 100-meter gold at the 2004 Olympics—when Bolt first competed but wasn’t yet dominating—and lost to the Jamaican at last year’s world championships in Beijing by a mere one hundredth of a second. The near miss has Gatlin chirping as of late. “I’m the closest threat he’s ever had.…It’s my duty to make it one of the most epic races in Olympic history. I’m going to win,” he said of his bid to take home the gold. “We are bringing it back to the United States. We’re going on tour with it around my neck.” Asked about his rival’s boasts, Bolt leans back and grins. “I have nothing to say.”

Ahead of Rio, Bolt will travel to the Cayman Islands, the Czech Republic, Jamaica and London for a punishing series of meets in the coming weeks. Tonight, he’d love to just kick back and rest, maybe root for his favorite NBA player, Steph Curry, or catch up on some episodes of Blacklist. But he can’t. As one of the most marketable sports figures in the world—he ranks 13th among all athletes on Facebook—Bolt is in constant demand. He glances down at his watch—the one he helped design—and realizes he’s behind schedule. He’s got to run.