‘Goodfellas’ Vs. ‘Scarface’: Who Ya Got?

Martin Scorsese’s gangster classic just turned 30–but does it have enough firepower to gun down Al Pacino’s crime saga? 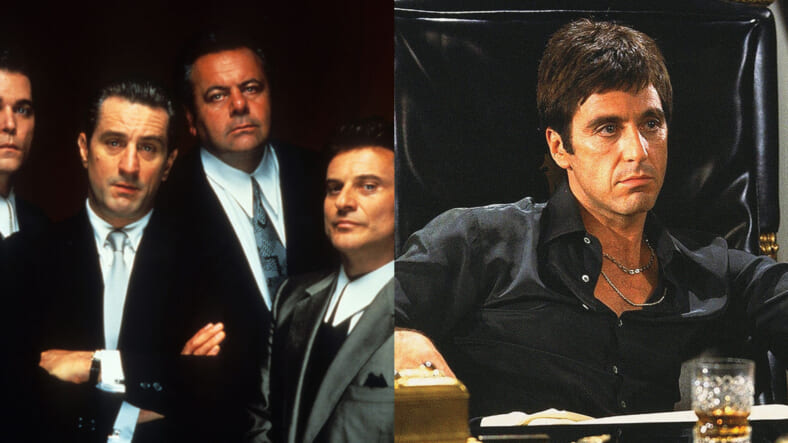 Goodfellas, Martin Scorsese’s crowning mobster movie achievement, just celebrated its 30th anniversary–and the 1990 classic still ranks among the greatest films ever made. Aside from being perhaps the most re-watchable movie of all time–yes, even the bleeped versions on basic cable–it’s truly the cinematic gift that keeps on giving. Goodfellas is packed with memorable scenes and quotes–take your pick from “As far back as I can remember, I always wanted to be a gangster” to “I’m funny how…like I’m a clown, I amuse you?” It’s no wonder that The Sopranos creator David Chase has repeatedly credited Goodfellas with inspiring his iconic HBO mob series, which notably enlisted several Goodfellas actors for the cast.

Goodfellas is unimpeachably great, but some might say Scarface is even more influential. After Al Pacino’s drug lord Tony Montana shook up the neon-lit underworld of 1980s Miami, the Brian De Palma-directed flick went on to inspire culture, style and swagger for decades to come. Perhaps no movie has been immortalized in as many hip-hop songs as Scarface, which counts Nas, Jay-Z, the Notorious B.I.G. and Rick Ross as devoted fans. And is there any movie quote more instantly recognizable than “Say hello to my little friend”? (Side note: If you’re looking for a Halloween costume, Pacino’s white cocaine kingpin suit is a way better look than dressing up as a young Ray Liotta.)

So which classic gangster movie reigns supreme? Go to versusgame.com on to play on your phone to predict the winner of this challenge and other fun face-offs!