“The climate has changed. Audiences have evolved. I don’t know things that we did would be as well received today.” 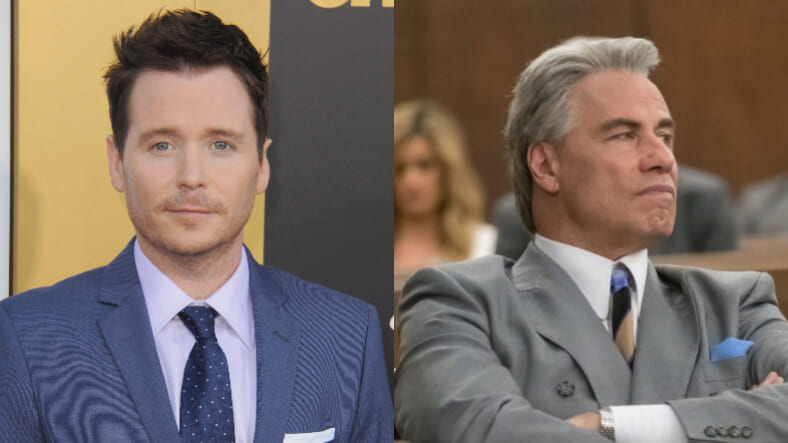 After spending years in Hollywood limbo, the biopic about the most infamous crime boss since Al Capone will finally hit theaters on June 15.

From his earliest memories of mobster lore to meeting the Teflon Don’s real son, the Long Island-born movie maker didn’t hesitate to tell us about everything Gotti.

You grew up in the NYC suburbs—what are your memories of John Gotti?

I remember John Gotti being in the news. In those days, there were three news stations, and you could count on a John Gotti clip once every two weeks of him thumbing his nose at authorities.

Also, he was in the paper everyday. America has this romanticized idea and fascination with gangsters. I was a young kid, but you get a bit older and you realize that not everything they do is so good. There’s a bad side to it. But as a kid, it’s like, “Oh, cool! A real-life gangster.” That was it, he was like the real-life Godfather.

Does one particular story stick out?

It was the legend about the guy who had the accident with his son. His son, Frankie Gotti, was killed on his bike, and then the guy kind of disappeared. That sort of cemented the legacy of like, “Whoa, this guy’s the real deal.” I can remember thinking that that’s the real thing. That was one early memory that sticks out.

To this day, that’s unsolved. Even if you were to ask John Gotti Jr. he would say, “I don’t know, maybe. I’m assuming, but it’s not like my dad came home and said, ‘I took care of that thing.’” They were just kids. They drew the same conclusion that everyone else did.

What made John Gotti’s story one you wanted to tell?

John Gotti Jr. spent a lot of time on the Gotti set—did you feel extra pressure to “get it right”?

Yeah I felt a lot of pressure. Big pressure to get it right. Aside from the obvious fact that he’s who he is, there’s pressure any time you make a movie about anybody. I did an ESPN 30 for 30 called “Big Shot,” and it was about a guy named John Spano who basically stole the New York Islanders, which is my hockey team—I’m a big hockey guy. So I told this guy’s life story, and it was important that he liked it.

When you tell people’s stories, you want them to feel like their side of the story is told and that their voice is heard. Ultimately, it was important to me that John Gotti and the Gotti family and John Travolta liked the movie. And they do!

How did you know John Travolta would be right for this role?

Also, I’m from that time. I saw Grease in a drive-in movie theater when I was a kid. Urban Cowboy, Saturday Night Fever—the list goes on and on and on. And then there was the second wave with Pulp Fiction—John Travolta has been uber-famous for like 40 years.

If John Travolta walks into a restaurant—and John Travolta is a big guy—everyone stops what they’re doing and watches him walk across the room. There are very few people on the planet who have that star quality, which I also felt was important when playing John Gotti, because John Gotti had that.

After seeing the movie, the real John Gotti Jr. said that John Travolta didn’t have his dad’s so-called “natural swagger.” What’s your reaction to that analysis?

I wasn’t there for the interview, but for John Gotti Jr., it’s like “Nobody had my dad’s swagger. It’s impossible.” It wasn’t specific to John Travolta. John Gotti Jr. thinks the world of Travolta as an actor and as a person. They’re tight!

Are you tight with John Gotti Jr.?

Yeah! Honestly, I would consider John Gotti Jr. a friend. He’s a good dude. John’s a fun guy to sit around with and have a glass of whiskey and smoke a cigar. He’s fun. He’s very smart, he’s well-read, he knows politics, he’s articulate. He’s no dummy, that’s for sure.

John Gotti was known as “The Dapper Don” for his flashy suits—where did you find the right clothes for the movie?

All the ties and pocket squares and the jewelry were the real John Gotti’s. That stuff is all real—literally straight out of the closet and on John Travolta. John Gotti Sr. had a specific type of Italian suit that he liked. Our costume designer, Olivia Miles, modeled the suits after the ones that inspired the real Gotti. He’s “The Dapper Don”—you’ve gotta make him look dapper.

Did you have any run-ins with real mobsters while making the film?

You know, initially you want to say, “Yes” because there are guys around. The mob doesn’t exist the way it once did, in my opinion. With technology—like everyone’s iPhone has a tracking device—I feel like there were more retired guys around. But I’m a director—I would never say, “Hey, are you still active?”

We definitely came across a lot of guys who are either in the life at some point or still are, but I don’t know. I wouldn’t have asked and even if I did, they’re not going to tell me. But they were all cool to me, thank god!

They had respect for what you were doing, right?

Right. And I think they understood the pressure I was under. We had lots of production challenges as well. The thing about this movie that might disappoint the “mob” fan is that it’s really not a blood-and-guts mob story. It’s not Scarface. It’s not really violent. Yeah, people get killed, and there’s all that, but it’s not like over-the-top violence, blood and guts.

What are your favorite mob movies of all time?

But those are big studio movies—we were independent. We were run-and-gun. We were out there making an independent gangster movie with a movie star which is challenging from a production standpoint.

Were there any advantages to making the movie independent of a big studio?

One thing we definitely didn’t do is knock off other gangster movies. We’re our own brand of a gangster film. That was important to me, too. Even musically we had different choices. Listen, you’re never going to remake The Godfather, not on an independent level, so you have to get creative and create your own identity. What I don’t want to do is fail trying to knock off something that’s been done so well. You have to make your own movie.

Let’s talk Entourage. Can you tell us the wildest experience you had while making that modern classic?

The whole thing was kind of wild. At the time, you could almost say it was experimental in places. We shot at the U2 concert and nobody knew. We said we’re the cameras and put on our microphones. Even at the time I was like, “How are we going to do this? We can’t do this.” We did it.

For us it was always a challenge, like can this be done? We went to Cannes Film Festival and ended up on that big red carpet with all those people. Anytime we took the creative challenge where there was a real risk of failure—those are the fondest memories I have of production.

Then there was the fun part. We shot in Hawaii. It took us to so many great places traveling around. Even when we did the movie, promoting the movie—it was such a unique experience.

Every experience in your life or career holds a different place or has a different value. What I learned directing Gotti—I couldn’t even put into words how much I learned throughout this process. But Entourage is on its own level—like next-level untouchable in terms of being unique. It was pretty crazy what we did.

Now people ask about a reboot, but the climate has changed. Audiences have evolved. I don’t know things that we did in 2008, 2009, and 2010 would be as well received today. It’s a good group of guys, and at the time that’s what people wanted and that’s what we were doing. If that’s not in the zeitgeist anymore, I don’t think anybody would want to do it. I think it’s good that the change is here, and it’s time to evolve and move on.

You famously used to roll with Leonardo DiCaprio and a gang of hot young actors in the so-called “pussy posse.” Did anything you experienced from those days make its way onto Entourage?