‘Grass to Glass’: Why Foraging for Cocktail Ingredients Is a Wild New Drink Trend

Here’s mud in your eye! 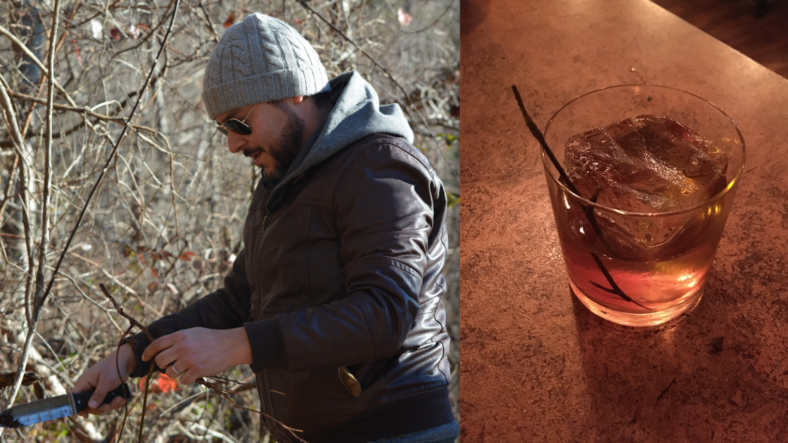 While foraging for cocktail ingredients in the wild isn’t exactly a new concept—we’re pretty sure some intrepid caveman added a hint of dirt to his fermented wooly mammoth spit—it’s absolutely having a moment. Whether you call the trend “grass to glass,” “dirt to drink” or “grub to glug,” scouring for fresh, local ingredients to use in drinks is now an earthy obsession for many of America’s top mixologists.

Enter the team at No Taste Like Home, an eco-tourism company based in Asheville, North Carolina, that not only provides “wild food tours” to wannabe foragers, but also, in conjunction with local restaurants, allows them to actually eat and drink what they find. (The fact that the Southern city is home to some of the country’s most talented chefs makes the experience that much more awesome.)

Of course, when Maxim was presented with the opportunity to tag along on an excursion, we chose to concentrate on finding roots, twigs and berries that would contribute to a far more noble cause than a tasty meal—that is, getting wasted.

Luckily, No Taste Like Home’s Alan Muskat was game. Along with collecting the usual mushrooms and greens, he helped us dig out sassafras roots and chop away at birch twigs, all in hopes of providing enough raw materials for a kick-ass cocktail. Besides the fairy potatoes lurking in the dirt, the bright red sumac plants we almost sped past, and the wintergreen plant that smelled just like Orbit gum, there were drink-ready ingredients in hidden in every corner, from chicory to rose hips to feral apples.

For a Manhattan-based cubicle slave like myself, foraging was the perfect antidote to city life. I was able to act out all my mountain-man fantasies—wielding a large knife, heaving trees out of the ground by the roots, and chewing on twigs with only the faintest sense of whether I’d poison myself and die.

The clean air helped me discern the tastes and smells lurking underfoot—sassafras branches may look like twigs, but they smell just like root beer (and taste even better when mixed with rum).

After a much-needed shower, we brought what we found to Nightbell, a small-plates restaurant owned by husband-and-wife team Katie Button (executive chef) and Félix Meana (beverage and service director) that, appropriately, focuses on local Appalachian ingredients. Along with an incredibly delicious dinner, we were served a variety of exceptional cocktails created by mixologist Phoebe Esmon. Our favorite—her take on an Old Fashioned with cognac and Jamaican rum instead of whisky—utilized the roots and twigs we found. In her words:

I made the syrup with a combination of the foraged items—sassafras, birch and wild ginger—along with some spices we had in dry storage: cloves, allspice, and juniper berries, along with some fresh orange peel. I designed the syrup to serve as both sweetener and bitters in the drink; I didn’t want to add bitters that might step on the more floral aspects of the ingredients. The sweetener was a blend of white and demerara sugars. The cocktail was stirred and served on a big rock, garnished with a spice bush twig which I set on fire before it went to table, for an aromatic garnish.

Here’s the full recipe, so grab a knife, hit the woods, and try not to kill anyone.

Peel (no pith) of half of a navel orange, minced

Place aromatics in a 3 quart sauce pan with 2 quarts water; bring to a boil, then simmer until reduced in volume by half. Remove from heat and allow to come to room temperature. Strain and then put back on medium heat. Add equal amount of sugar. Stir until dissolved. Remove from heat. Cool.