‘Step Brothers’ 10th Anniversary: Everything You Never Knew About the Ultimate Bro Comedy

“Did we just become best friends?” 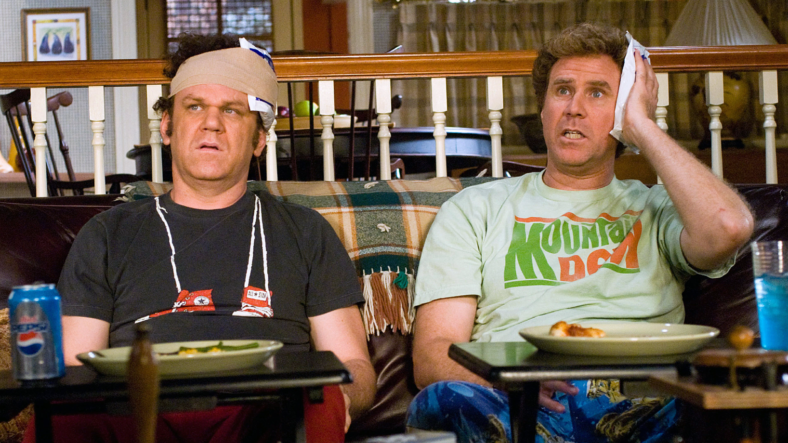 Since its release on July 25, 2008, the movie Step Brothers has become a certified cultural phenomenon. One of the greatest actors of his generation, Joaquin Phoenix, once announced his fondness for the film, stating: “I watch Step Brothers more than any other fucking movie.”

In an op-ed for Slate, writer Jack Hamilton proclaimed The Big Short as Adam McKay’s second best film, behind only Step Brothers. (McKay won an Academy Award for Best Adapted Screenplay as well as being nominated for the Best Director Oscar for The Big Short.)

When the New Orleans Saints won the Super Bowl in 2010, after years of futility, the locker room was initially completely silent. That is, until someone yelled, ‘It’s the fuckin’ Catalina Wine Mixer!’ The other players repeated the sentiment, and the celebration began.

The Saints story is just one of many sublime anecdotes culled from Alan Siegel’s fantastic recent piece for The Ringer, “Unadulterated Joy: An Oral History of ‘Step Brothers.’” It is a captivating and comprehensive look behind the making of the classic.

In fact, The Ringer story was so phenomenal, it left us yearning for more. As a result, in the true tradition of innovation fostered by Prestige Worldwide, I incorporated some of the highlights of Siegel’s piece, along with some other fun facts about the comedy classic.

The end product is a veritable feast for Step Brothers superfans, and it’s definitely way better than being forced to eat white dog crap. Read on:

1. Mary Steenburgen (Brennan’s mother, Nancy) played Will Ferrell’s stepmother in Elf (2003) as well as his biological mother in Step Brothers.

Steenburgen is only 14 years older than Ferrell in real life.

2. On set, after the first take of Kathryn Hahn’s improvised “vagina monologue”, the whole crew was so impressed that they spontaneously broke into applause.

“I wanna roll you up in a little ball and shove you up my vagina. You could just live there, it’s warm and it’s cozy. I wanna walk around with you in there just knowing, whenever I feel a little tickle or scratch, that it’s just your hair on my vagina.”

Mary Steenburgen actually came over and gave Hahn a hug and said, “Congratulations.”

3. Thomas Lennon and Jon Hamm were both up for the role of “the one they call Derek” ultimately won by Adam Scott.

4. The pivotal moment in Brennan’s adolescence, when Derek and his football buddies sing in unison that “Brennan has a mangina,” takes place at the Great Valley High School Talent Show.

5. The kitschy t-shirts that Ferrell and Riley wore throughout the movie were meticulously vetted from “racks and racks” of choices.

The goal was for the step brothers to look like actual children, as opposed to ironically clad hipsters. Mission accomplished.

6. In the scene where Brennan declares, “Did we just become best friends,” (another candidate for most quotable line) there is a sign in the background for Hugalo’s Pizza.

Hugalo’s is the restaurant where Will Ferrell delivered pizzas in Talladega Nights.

7. Because the actors were provided with so much flexibility to improvise, once it was all said and done, a million and a half feet of film were shot.

An excellent example of this is the Ken Jeong scene with Dale, who had gone “Kerouac on everyone’s ass for 22 years”:

“My scene with John C. Reilly was I think maybe 30 seconds,” Jeong said. “I find a temp job for his character to get to Catalina Island for the third act. It was just a one-minute scene and quite frankly if I were directing it, I’d be like, ‘Look, we gotta beat the clock guys, let’s just get this out in 20 minutes so we can get this in before lunch, I am starving.'”

“We did that scene for three hours.”

8. The “white dog crap” that bully Chris Gardocki makes Brennan lick on the playground was actually made from powdered donuts.

Chris Gardocki is also the name of an NFL punter who played for the Bears, Colts, Browns and Steelers. His net average was 42.8 yds per and his career long was 72 yards.

9. An entire rap album was almost put together by McKay and the producer of “Boats and Hoes” featuring some of the more popular artists of the day, including Rhianna.

Unfortunately, scheduling issues prevented this from ever happening. Furthermore, the chorus from “Boats and Hoes” is a sample from McKay and a phone conversation with the producer.

“There’s this final moment where Richard Jenkins is talking to Will and John after they’d just blown up the Catalina Wine Mixer. I was like, ‘This isn’t quite getting there.’ I was like, ‘What’s your version of Prestige Worldwide?’ He’s like, ‘What do you mean?’

And I was like, ‘Why don’t you just tell a story about when you were a kid and you tried to act like a dinosaur? And eventually people told you it was stupid and you stopped doing it.’ And he was like, ‘What do you mean?’ And I was like, ‘Just try it.’ And goes, ‘You just want me to make it up right now?’ And I go, ‘Yeah, fuck it, just tell them the story. I’ll coach you from the side.'”

“He just did it. He did a monologue. And I said, ‘Let’s do it one more time. You could add this.’ Both of us kind of wrote it together in two takes. And then he did it again and I was like, ‘That was great.’ And he goes, ‘Don’t you dare put that in the movie.'”

11. Ferrell is really singing and Reilly is really drumming in the event saving scene at the Catalina Wine Mixer.

Reilly learned to play the drums on the set of the 1995 film Georgia, which recorded live music from the cast.

12. The Catalina Wine Mixer scenes were not shot in Catalina, but in Palos Verdes.

In fact, Catalina Island can be seen offshore in the background of some of the shots.

13. Ferrell and McKay had an idea for an unbelievably dark ending.

It involved Dale and Brennan on the back of an army truck driving past a sign that read “Fallujah, 3 Kilometers.” Both the studio and producer Judd Apatow were not thrilled with this suggestion and said they were not allowed to film it.

Last year, Will Ferrell revealed, if it were to happen, what it would potentially involve. According to Ferrell, “We had a whole story where John and I follow our parents to live in a retirement community and try to convince them that we earned the right to retire as well.”