The Gronk Party Ship Was A Floating Frat Party From Hell

What else would you expect? 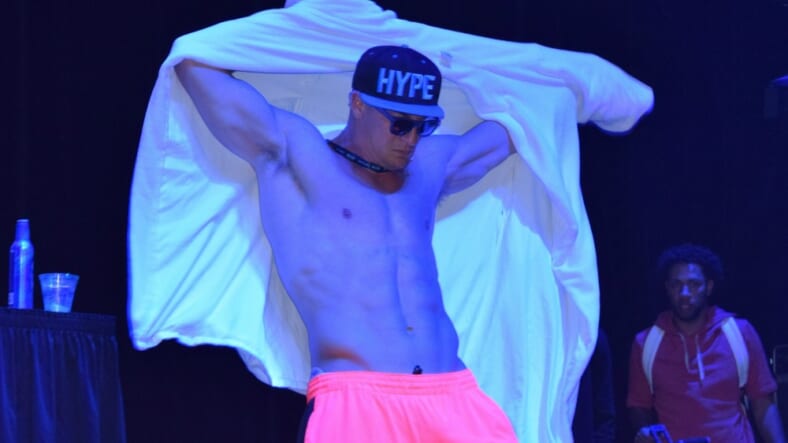 On Friday night in Miami, nearly 700 overgrown adolescents boarded a Norwegian Cruise Liner with giddy anticipation—they were in the presence of the almighty Gronk. The next three days promised drunken debauchery on the high seas and the slim, albeit very real chance of touching Rob Grownkowsi, the 26-year-old tight end for the New England Patriots.

It wouldn’t be an easy task. As the Boston Globe reports, he was surrounded by an “imposing entourage” all weekend, keeping the pec gropers and high fivers somewhat at bay. But no muscle could stop Gronk’s fan of fantasizing about his muscles. Just check out this video from L.A. radio’s The Woody Show. It’s a fascinating look at the trashiest thing in the sea outside of the Great Pacific Garbage Patch. The women are thirsty for sex with Gronk. The men are thirsty for sex with someone who just had sex with Gronk. And Gronk is oblivious to everything except the music.

Here’s a funny detail from that Boston Globe story: The ship holds 2,300 passengers and it was full, meaning fewer than half of them were Gronkamaniacs. An easy way to tell the difference between passengers was to look at the inflatable zebras at 3:30am. Anyone still saddled up was there for Gronk, including the couple he offered $10,000 to “bang in front of everybody” on the floating party palace.

At 3:30 a.m. on the #GRONKSPARTYSHIP, this woman is officially my spirit animal. pic.twitter.com/D03EiWBwF4