We Got The First Taste Of Guinness Irish Wheat Beer, And Here’s What You Need To Know

Guinness fans, you’re in for a treat. 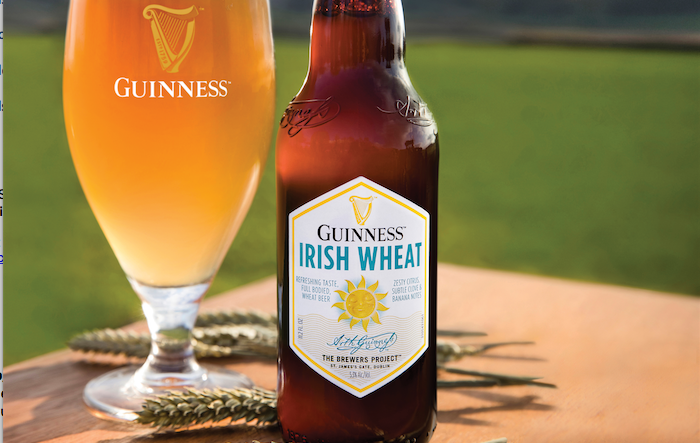 When it comes to Guinness, we invariably think of the venerable Irish brand’s signature stout. “The Black Stuff” is practically required by law to flow from the taps of any self-respecting Irish bar, and its distinctive dark hue and creamy head make it perhaps the most recognizable beer ever poured.

But Guinness isn’t just a beer, it’s a brewery. And so while the beloved stout may forever reign supreme in the hearts and minds of loyal superfans, the brand’s brewers are always thinking about their next big launch. In this case, that’s Guinness Irish Wheat.

I got an exclusive advance taste of Guinness’s first-ever wheat beer this week, and I can tell you that it’s sure to appease drinkers who enjoy the traditional wheat style. Set for a nationwide rollout in March to coincide with St. Patrick’s Day, Guinness Irish Wheat is a crisp, refreshing, easy-drinking brew that’s imbued with the classic wheat beer profile of zesty citrus, hints of banana and clove, and even a subtle whiff of bubble gum.

“It was actually invented by one of our German brewers at Guinness, but we use 100 percent Irish ingredients—the yeast, the water and the wheat,” says Guinness Brewery Ambassador Chris McClellan. That wheat, by the way, doesn’t always flourish amid Ireland’s briny, salty air, so Guinness sourced it from a sunnier central area of the country.

“We’ve never made a wheat beer before, and we’ve never had a supply chain for it. We worked to complete every step of the process correctly in Ireland,” McClellan says. “It’s creamy, very refreshing, easy to drink. It’s great anytime, but it’s a really great warm weather beer.”

The golden-hued brew, which was developed within the long-running Brewer’s Project program out of Open Gate Brewery in Dublin, clocks in at 5.3 percent ABV and will be sold exclusively in six packs of 11.2 ounce bottles.

Look for it to hit a beer store near you sometime in March.