The ‘Game of Thrones’ villain is unstoppable. 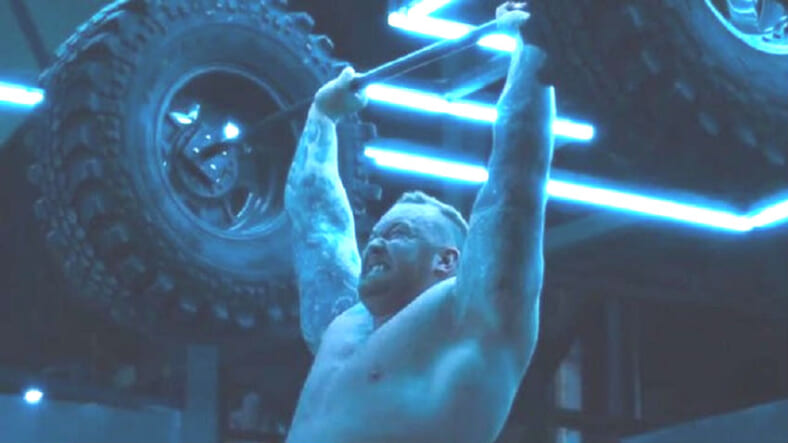 Why would anyone in their right mind go up against a man like Hafthor Björnsson, the gigantic strongman who played The Mountain on Game of Thrones? Seriously, even a fake, choreographed fight in a movie sounds absolutely terrifying.

A pair of stuntmen probably found out just how terrifying it is to be on the wrong end of Björnsson’s fists in the above clip. It’s a cut from Kickboxer: Retaliation, a sequel to a reboot of Jean Claude Van Damme’s 1989 B-movie, Kickboxer.

One year after finding vengeance for his murdered brother, MMA champion Kurt Sloane finds himself back in Thailand – kidnapped and imprisoned there by a powerful gangster (Christopher Lambert). His only shot at freedom is to win an underground death match against a 400lb killer enhanced with state-of the-art drugs (Game of Thrones’ Hafþór Júlíus Björnsson) . To make it out alive, he seeks training unlike anything he’s ever endured, with the help of the legendary Master Durand (Jean-Claude Van Damme) and fellow prisoner Briggs (Mike Tyson).

Yeah, Mike Tyson is in it too, because of course he is.

Let’s not kid ourselves, these Kickboxers are just as B-level as the original, but they also look like a hell of a lot of fun. Who doesn’t kind of get a kick out of a 6’8″ literal mountain of a man tossing hapless guys around like ragdolls until he faces the one man who could find his weakness?

Kickboxer: Retaliation just premiered in theaters Friday, and is available On Demand.