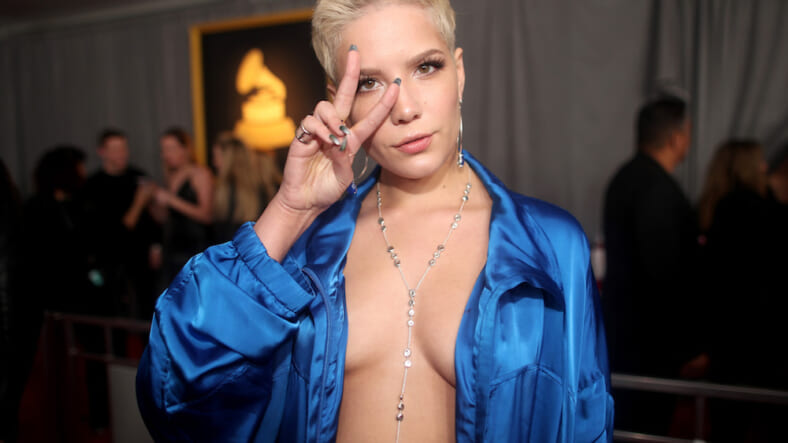 The “Nightmare” singer wore a black leather bodysuit and matching thigh-high boots while she moved to the newly released single in footage posted to her Instagram story. Thanks to a Halsey fan account, we can all watch it endlessly above.

The pop star is joined by the club’s exotic dancers in a second clip that included the hashtag “#supportsexworkers.”

As Billboard notes, Halsey received backlash for the post. But she doubled down on her stance in a thread of tweets that appear to have been deleted.

“Getting a lot of shit because I posted #supportsexworkers on my story last night,” she reportedly wrote. “Just to be clear. I DO support sex workers. I support consenting humans in the field. My statement obviously excludes people forced into sex work. It all comes back to autonomy and choice.
“

“I notice every day that the conversation surrounding feminism is both bigger but more nuanced than ever with social media as a platform. I try, and I hope you try, to be mindful of cultural and regional differences that complicate the conversation.”

“I always try to listen and educate myself,” she concluded, “but I hope you keep this same energy with all your other favorite artists who have been to a strip club before and your not just attacking me because I said I support the women involved.”

Halsey herself is definitely putting forth a racy—but decidedly feminist—image.

The “Nightmare” music video, which has garnered 15.7 million views since its release on May 16, features the artist dressed in a number of head-turning looks as she belts out hard-hitting lines like “No, I won’t smile, but I’ll show you my teeth” and “I’ve been polite, but I won’t be caught dead/Letting a man tell me what I should do in my bed.”

The track is being called her “most daring single to date” with regard to its subject matter and alt-rock-esque sound.

Whether she’s getting down with exotic dancers or twerking to Lil Nas X’s rap-country crossover hit “Old Town Road,” we’re here for Halsey.

when someone says “cowboy themed birthday party” and you already own the chaps @LilNasX pic.twitter.com/domL4lpP5i