In Praise of Hans Gruber, the Finest Villain of Our Time 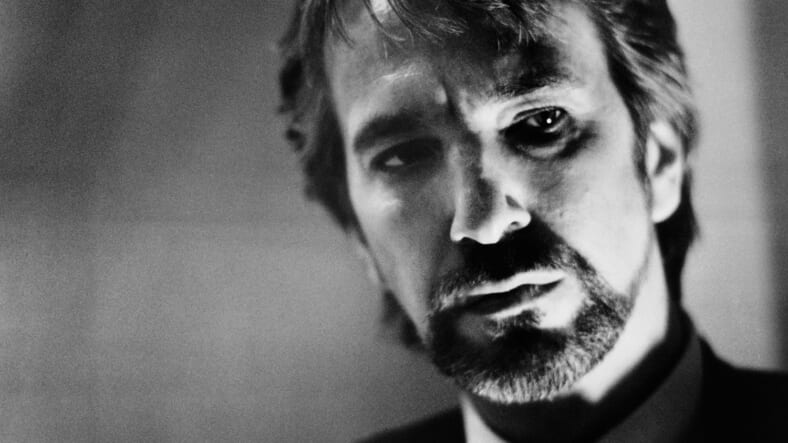 It’s nearly impossible to dispute Die Hard’s legacy. The 1988 action-thriller that found Bruce Willis in a bloody (and barefoot) game of cat-and-mouse against heavily-armed terrorists in a Los Angeles skyscraper captures some of the best cinematic tropes of action flicks from the end of the 20th century: the reliance on campy dialogue, the delicate balance between humor and harm, and Bruce Willis as John McClane. There’s a reason why, for many movie buffs, Die Hard beats out A Christmas Story or It’s a Wonderful Life as the best Christmas movie of all time: Hollywood rarely makes movies this enjoyably brutal yet cinematically consistent anymore.

But more importantly, it introduced Alan Rickman to American audiences for the first time in the best possible way: as the sneering, conniving German terrorist Hans Gruber.

It would be far too generous to claim that, with Gruber, Die Hard director John McTiernan and writers Steven de Souza and Jeb Stuart reinvented the modern villains. With the Cold War coming to a close, American cinema was already in search of a new villain outside the notorious Russian communists (see: every post-Goldeneye James Bond movie) and vicious Nazis (see: Indiana Jones). The villains of action-adventure films for the past 50 years have all been caricatures of one-dimensional villainy, from Ernest Blofeld’s hard-on for world domination to the obvious ideological stand-in of Ivan Drago against Rocky Balboa.

Gruber’s character presented an alternative to these villainous caricatures. Rickman played a incredibly cunning, incredibly dangerous nationalist terrorist with hidden motive of stealing a buttload of cash from the Takagi corporation. Gruber plays on deception and uncertainty more than brawn and intimidation, from convincing the company chairman that he’s a mere terrorist rather than a robber to putting on a convincing American accent as “Bill Clay” when he runs into McClane. Chuck Klosterman’s recent book on villainy I Wear the Black Hat captures Gruber’s evil perfectly. As writer Daniel Reynolds puts it, a “villain is someone who knows the most but cares the least”:

With a fantastic calm, Rickman’s Gruber knows everything about the Nakatomi Plaza upon his seizing of it. He knows all about the company’s leadership. He knows where the company’s loot is and how to get it. He also knows how to take advantage of local law enforcement, the FBI and the news media so as to play them off one another. Gruber knows all of this and drolly delights in it. As he informs his hostages: he has left nothing to chance. He knows the most about the actions of everyone around him and his “terrorist” group’s true motivations, but cares the absolute least about how his actions will harm people (though, to be fair, some of the people that inevitably end up getting hurt/killed in the film, i.e. Agents Johnson and Johnson, probably had it coming). Sure, his henchmen also don’t care about hurting people – Gruber’s right-hand man Karl seems significantly less concerned with everyone’s well being. But, it is clear Karl and the rest of the goons only know what they need to know to assist Gruber in completing his master plan and grand escape. Gruber is definitely (defiantly?) the best worst guy.

This was all by design, I suppose: Even Rickman himself saw Gruber as a cold, amoral Machiavellian man than some twisted, inherently evil monster. “As far I’m concerned, I’m not playing ‘The Villain,'” Rickman told a reporter while on set shooting Die Hard at the time. “I’m just playing someone who wants certain things in life, has made certain choices, and goes after them.” And this is what makes Gruber so dastardly: he is “the ends justify the means” embodied and with an accent. He “cares the least,” as Klosterman puts it, but still does stuff like this.

We wouldn’t fully appreciate the extent of Gruber’s villainy if it weren’t for his frequent radio exchanges with McClane, a mechanism that helps give both characters purpose in opposition to each other. McClane is destitute, exasperated, anxious and uncertain about what he’s even doing at the Nakatomi building in the first place; by contrast, Gruber’s manipulative and in control, despite McClane’s presence, playing the police and McClane against each other with a sort of strategic intellect that’s fit for an actual terrorist sell. When delivered with his sneering, deadpan drawl, Rickman’s Gruber can make the hairs on the back of your neck stand up. He’s the one villain who doesn’t intimidate or threaten through brute force, but cons and cheat, connives and swindles — and he’s always one step ahead. In a Hollywood where the hero always wins, I find myself almost hoping Gruber gets away with it whenever I flip on Die Hard.

We can see the impact of Guber’s cold, calculating malevolence in the class of villains that followed Die Hard. It’s clear in David Suchet’s Nagi Hassan, the terrorist at the heart of 1996’s Executive Decision; it’s clear in Gary Oldman’s bristling Ivan Korshunov, who gets his neck snapped by Harrison Ford in 1997’s Air Force One: we even see shades of this in the patently insane Castor Troy, portrayed by the patently insane Nicolas Cage, in 1997’s Face/Off. Every villain of the 1990s, no matter how colorful or egomaniacal, owes their intrigue and their cunning to Rickman’s disconcerting performance as master thief Gruber.

On the internet, Rickman’s enjoying accolades for his more recent role as Severus Snape in the Harry Potter franchise, a similarly complicated and complex villain who Rickman masterfully portrayed with subtlety and poise. But despite his vast filmography, from the Potter franchise to idiosyncratic comedies like Galaxy Quest and Dogma, Rickman will always be remembered for showing a post-Cold War America what modern villainy really looks like — and blowing us away in the process. Rest in peace, Alan Rickman. As your ride off into the sunset, just remember one thing: yippie-ki-yay, your glorious motherfucker.