‘The Hateful Eight’ Is Too Much of a Good Thing

All of Quentin Tarantino’s distinct flourishes are on display, and it’s torture. 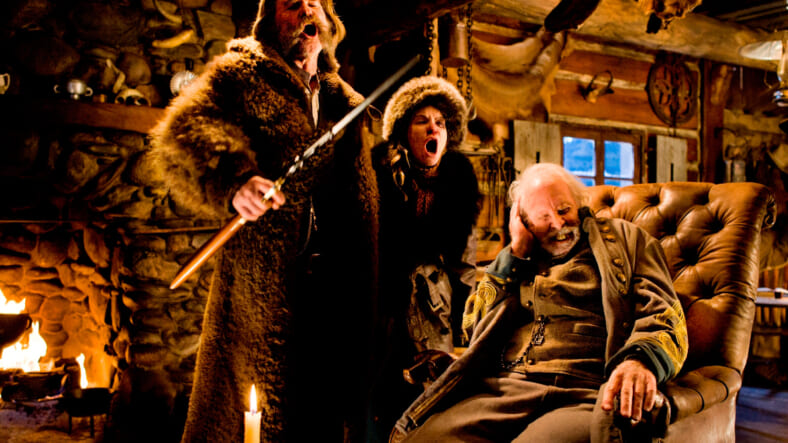 Quentin Tarantino is at something of a peak in his cultural influence. Once beloved solely for his cult films like Pulp Fiction, the mainstream success of the mega-popular Kill Bill movies just over a decade ago made the independent filmmaker part of Hollywood’s ecosystem. Inglorious Basterds and Django Unchained have become Tarantino’s most popular and critically acclaimed works to date, the latter earning him his first Oscar since his breakout Pulp Fiction back in 1994. Tarantino has always lived in American pop culture as an indie director, his distinctive style of filmmaking — his reliance on genre motifs from Westerns and kung-fu classics, his ‘aestheticization of violence,’ his non-linear storytelling, among other things — a recognizable departure from the cookie-cutter productions of major studios. But as the last decade has proven, we’re all actually living in Tarantino’s world — including, most importantly, Tarantino himself.This newfound attention doesn’t seem to please Tarantino much, but the resulting freedom to do whatever he wants seems to suit him just fine. With the The Hateful Eight, the director attempts to figure out just how much Vintage Tarantino he can feed his legions of fans before we throw up our hands and scream “stop, please no more!” One of the most appealing things about Tarantino is creativity, his peculiarly manic brand of cinematic fun; now he’s almost trolling us by producing another era-specific shootout, but a dark, brooding Mexican standoff in the middle of a frontier blizzard. Tarantino is at peak auteur in his insistence The Hateful Eight be shot on 70MM film (despite criticism), his enlisting of Italian composer Ennio Morricone of his beloved spaghetti Westerns to score his new project, his reliance on the steely gaze of Samuel L. Jackson to carry the action. The film is a concentrated distillation of Tarantino’s Western (lol) imagination, a call to his fans “look on my works, ye Mighty, and despair!”

The end result is an entertaining slog through the right hemisphere of Tarantino’s brain. The plot of The Hateful Eight is straightforward enough: eight murderous strangers find themselves holed up in a ramshackle tavern as a snowstorm sweeps through post-Civil War Wyoming. It’s perfect for Tarantino, a dutiful extension of his Western obsession tinged with the claustrophobia, suspicion, and paranoia of Reservoir Dogs. The assembled band of disheveled ruffians screams disaster: Jackson delivers a chilling performance as Major Marquis Warren, a former Union soldier turned bounty hunter; Kurt Russell intimidates as the scowling, mutton-chopped John “The Hangman” Ruth, who’s simply trying to transport prisoner Daisy Domergue (an understated but remarkable Jennifer Jason Leigh) to the town of Red Rock for hanging. Some of the rest of the ‘Eight’ aren’t much to look at, frankly: Tim Roth is a presentable stand-in for the rubberfaced Christoph Waltz, Demian Birchir a mumbling, bumbling cowhand, Michael Madsen shines as Michael Madsen with a bad haircut. Throw in a few former Confederate soldiers (Bruce Dern and Walton Goggins), and we can see where things are headed. From their arrival at Minnie’s Haberdashery with a blizzard bearing down on then, the Hateful Eight is a potent mix of unstable elements — and we can’t wait to see them explode.

And boy, does Tarantino make us wait. The man’s a master of building anticipation, preying on his audience’s expectation before delivering a killing blow. This was to be expected, I suppose: Tarantino did warn us that The Hateful Eight would have “no heroes, no Michael Landons. Just a bunch of nefarious guys in a room, all telling backstories that may or may not be true. Trap those guys together in a room with a blizzard outside, give them guns, and see what happens.'” And he’s not wrong: the film leans heavily on suspense rather than Tarantino’s usual mix of blood and laughter. It’s like The Shining, but with less ghosts and way, way more guns.

But The Hateful Eight‘s claustrophobic drama suffers from cabin fever.  The conversations between characters are disjointed and inconsistent, opaque lies and half-truths that leave the audience slogging through a string of soliloquies. Tarantino does masterfully bring the haberdashery to a slow boil (but not like frogs, because that’s not a real thing), culminating in an intense confrontation between Jackson and a Confederate soldier he once faced on the battlefield. By this point the movie is close to over: the only thing left is for everyone to die.

This is the thing: When Tarantino isn’t self-flagellating himself with Morricone in a Hollywood sound booth, the movie is still classic Tarantino. When The Hateful Eight isn’t mired in an excess of dialogue, it’s the crisp, bloody havoc we know and love. Despite its self-seriousness, Tarantino retains his sense of humor in the right ways to alleviate the gloominess of the Eight’s enforced company (“This door is a whore!”). But even with jokes, the movies lacks the dynamism and lightness of Pulp Fiction and Django Unchained, or even True Romance. It’s as though Tarantino, now basking in the spotlight, wanted to take his fans back into the shadows, into something a bit more challenging than his devotees are used to.

The Hateful Eight is worth seeing. It’s entertaining and amusing, a welcome addition to Tarantino’s sprawling catalogue of genre films. But there’s always the slight fear that an auteur like Tarantino might push their distinctive aesthetic vision to an absurd extreme, like Wes Anderson’s transformation from stylish jokester with Rushmore to insufferably twee in Moonrise Kingdom. We’re all for letting Tarantino be Tarantino — after all, Tarantino’s catalog trumps Anderson’s garb any day of the week — but here’s hoping that he decides to expand his creativity beyond the snowy woods of the American frontier. Or, if he does decide to focus his next project on a similar type of psychological drama, lets make it a remake of Gilligan’s Island.

The Hateful Eight will open in limited release on December 25th and wide release on January 8th.