HBO Has Erased the Infamous ‘Game of Thrones’ Coffee Cup

“The latte that appeared in the episode was a mistake. Daenerys had ordered an herbal tea.” 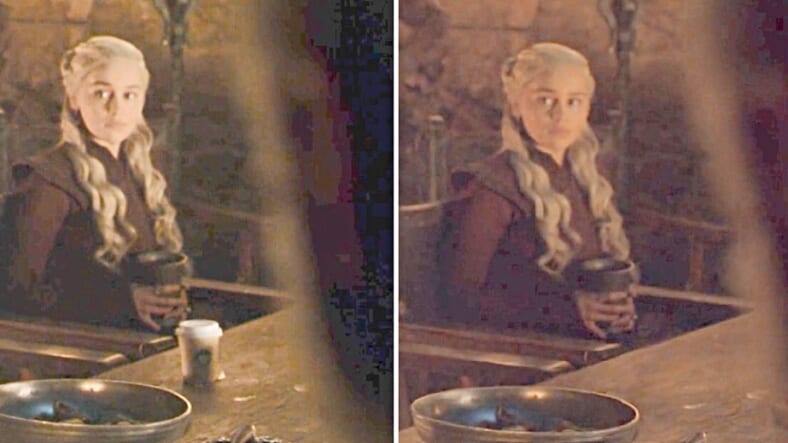 HBO has erased history. That’s right—the rogue coffee cup so infamous from episode 4 of Game of Thrones Season 8 is no more.

The cup, which many assumed was probably from Starbucks, was digitally removed from the scene by Tuesday, when its absence was noted by viewers watching the episode on the HBO Go app.

Now it’s just a memory of a meme—because the Thrones coffee snafu was real, and yes, HBO even admitted to it via the GoT Twitter account:

The latte that appeared in the episode was a mistake. #Daenerys had ordered an herbal tea. pic.twitter.com/ypowxGgQRl

“The latte that appeared in the episode was a mistake,” the tweet read, “Daenerys had ordered an herbal tea.”

The cup probably generated as much social media buzz as events in the show itself, and according to Market Watch it was likely worth a quarter-million dollars to Starbucks—given that there’s been general agreement that was probably a cup from the ubiquitous chain of coffee shops.

Erasure or not, this will likely go down as one of the more visible TV bloopers in years, especially given that errors like this are fairly rare in such high-profile shows.

Hopefully viewers will pay more attention to the show and not just keep looking for more stray coffee cups when episode 5 airs Sunday on HBO at 9 p.m. ET.