Are you really surprised? 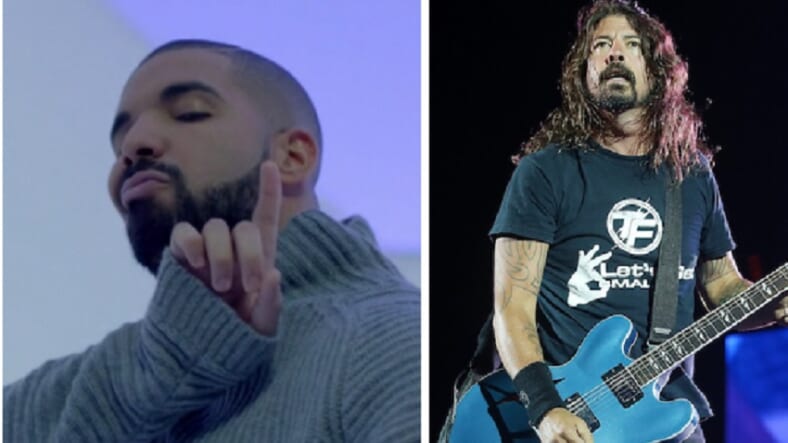 If Drake looks smug and Dave Grohl looks a little stricken in the photos above, there’s a good reason: Nielsen tracking indicates hip-hop and R&B have officially become the most dominant form of popular music in the United States for the first time ever.

As HuffPo reports, the reason for hip-hop’s supremacy—25 percent of the retail music market over 23 percent for rock—may not be a big surprise:

The reason for hip-hop and R&B overtaking rock is simple: online streaming. When it comes to album sales, rock continues to dominate, claiming 43 percent of physical album sales and 37 percent of digital album sales.

But R&B and hip-hop have come to utterly dominate the online streaming market, where they make up 29 percent of all songs streamed online ― that’s almost the exact same amount as rock and pop combined.

So if you’re still getting your tunes from a record store—and since vinyl’s actually coming back in a limited way, apparently those aren’t dead yet—you may not even realize just how huge hip-hop and R&B truly are now.

And hitmakers like Drake, Kendrick Lamar and Migos have Spotify and iTunes to thank for that.

Hip-hop artists can’t rest on this, though—HuffPo also notes that their current dominance “was helped by the release of more than a few dominant albums between January and June, like Drake’s ‘More Life,’ Migos’ ‘Culture,’ Future’s ‘Future’ and Kendrick Lamar’s ‘Damn.'”

If sales of those big albums drop, rock could end up back on top before the end of the year.

Maybe Dave Grohl and co. will reclaim the rock crown after all.