‘House of Cards’ Finally Finds Itself a Real Cage Match

After seasons of benign foes, the fourth is pitting Underwood against Underwood in a fight to the finish. 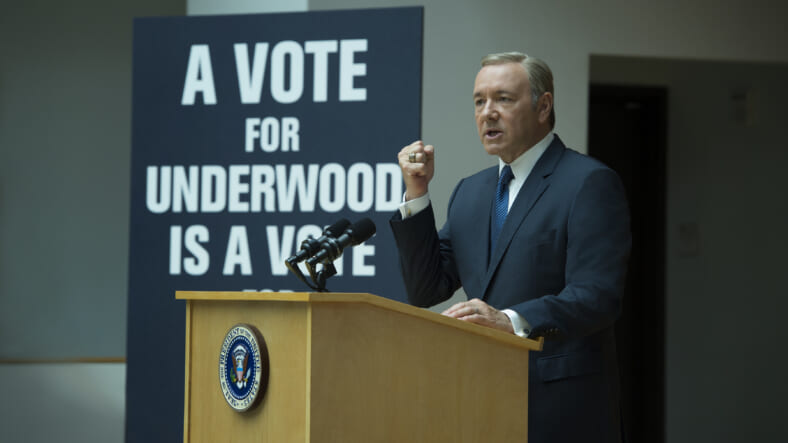 The biggest problem with House of Cards has never been an inability to entertain — for a show that most viewers binge-watch in a matter of days, its twists and turns should come with a warning for those with seizure disorders. But for all its heightened tension and improbable storylines, the show has always had one fatal flaw: its bogeymen were never that scary. But where House of Cards seasons past may have failed us on villains worthy of such overwrought machinations, season four has finally brought on a formidable opponent: Claire Underwood.

The start of the fourth season drops us back into the aftermath of the unraveling of the Underwood union — a situation not quickly resolved and forgotten in episode one, as most cliffhangers tend to go. Putting on a Clinton-esque front as Frank Underwood (Kevin Spacey) hits the campaign trail, Frank and Claire’s (Robin Wright) amorphous marriage becomes a battle of wills, with Claire working doggedly against Frank for much of the first six episodes. The pair’s marriage is more intoxicating than ever when watching arguably the two worst, most amoral characters of the show use their powers against each other, rather than in tandem.

House of Cards has long been reticent of giving viewers more than single dimensional glimpses into the lives of its supporting cast. It was a trick that worked in season one, allowing viewers to feel complicit in Frank’s actions, even as they became steadily more reprehensible. But as the show continues to dispense of Spacey’s fourth-wall breaking monologues — a largely transparent way to telegraph the rapidly deteriorating half-life of Frank’s moral compass — it leaves room for Wright to fill out the mysteries of Claire she’s played close to the vest for the prior three seasons. It allows the pair do their worst to each other without showing viewers their hand first. (Better get that seizure medication ready.)

Season four also picks the pace back up after a lukewarm season three full of durm, strang, and rehab. Still, given that this season focuses heavily on the Underwood’s time on the campaign trail, not using the story to give a nod to our current political zoo feels like a cop out, rather than a thoughtful artistic choice. Four seasons in, viewers are still left with no better an idea of why the Underwood’s want political power, except for power’s sake. Political stances don’t feel congruous season to season; their only mention is as they relate to political rivals, and, after four seasons of watching the Underwoods amass rivals, even that seems to be wearing thin.

What House of Cards lacks in risks this season, however, it makes up for in pure acting. To watch Spacey and Wright square off is a delight far more trenchant if you put aside the numerous MasterClass commercials on Facebook inviting you to take an online acting class with Spacey. After famously eschewing stunt casting for years, the show has opened its gates to a veritable who’s who of heavy hitters: Ellen Burstyn, Cicely Tyson, even Neve Campbell are all sure to get award consideration. While House of Cards’ previous guest star disavowal felt enlightened in season one, and on a risky upstart network at the time no less, bringing in masters of the craft at this juncture feels appropriately timed.

House of Cards is at its best when it’s examining the sticky intersection of political power and personal morality in real time. While the new season has put a temporary stay on the fraying of the rope of House of Cards’ believability, it’s all still incumbent on whether the show continues to give us a reason to root for the Underwoods after all this time. For now, Underwood vs. Underwood is reason enough, though the latter half of the season still remains to be seen. But if one thing is for sure, even with showrunner Beau Willimon’s exit, House of Cards still has more tricks up its sleeve than Frank or Claire ever will.

House of Cards will premiere on Netflix on March 4th, 2016.