These zombie-killing badasses were getting ripped off by their bosses… 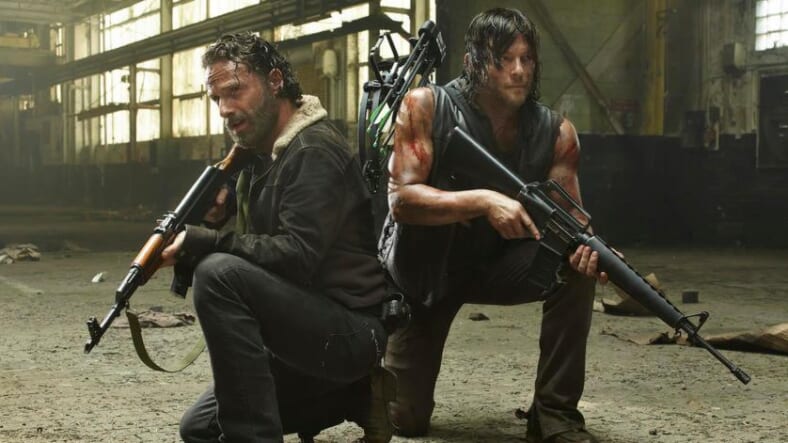 The Walking Dead may be TV’s top-rated drama, but the stars of the post-apocalyptic zombie smash were making just a making a fraction of some of Hollywood’s biggest TV actors until very recently.

Andrew Lincoln for instance, who plays series star Rick Grimes, reportedly made just $90,000 per episode for the first six seasons. That might sound pretty good to your average starving actor, but it pales in comparison to the cool half mil that Game of Thrones stars take away per episode. And Kaley Couco and her fellow stars on the Big Bang Theory pull in a whopping $1 million per episode.

It’s the same story for TWD‘s Norman Reedus, whose portrayal of Daryl Dixon was earning him a measly $80,000 per show.

Unilad has a theory about why they were apparently getting ripped off:

Uproxx investigated the reasons why two of today’s biggest TV stars are making so little, citing the huge ensemble cast as a potential pressure on AMC’s wallet as they can’t afford to pay everyone.

However this point is unlikely to be true because the five biggest stars of Game of Thrones, a show with an immense cast, are paid half a million dollars per episode.

Even when compared to some of AMC’s other top-rated shows, it seems that The Walking Dead cast has gotten the short end of the stick. Business Insider reported in 2013 that Bryan Cranston and Aaron Paul of Breaking Bad were earning $225,00 and $150,000, respectively.

And on the network’s acclaimed period drama, Jon Hamm reportedly re-negotiated his contract in 2012 to take $275,000 per episode for playing Don Draper in Mad Men’s final seasons.

What gives, right? Luckily for Lincoln and Reedus, The Walking Dead’s show runners apparently acknowledged how indispensable to the series their characters are, and they too were able to renegotiate their contracts.