Upgrade your Memorial Day Weekend burger with this delicious recipe. 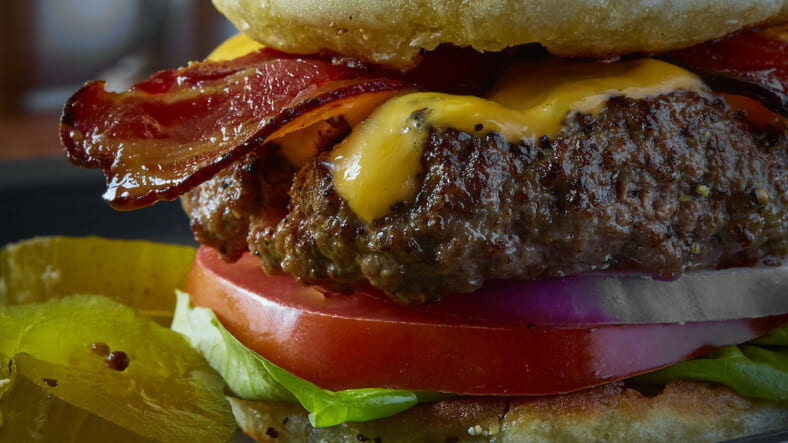 (Photo: From the book “Knife” by John Tesar)

John Tesar is the real deal. Famously dubbed “the single most talented cook I ever worked with” by Anthony Bourdain, Tesar is the meat-obsessed chef behind popular Dallas steakhouse, Knife, as well as a two-time Top Chef contestant. He recently published his first cookbook, Knife: Texas Steakhouse Meals at Home, where this recipe for the “Magic Burger” comes from. Tesar gave us some background on the inspiration for his epic burger, which is meant to be cooked in a pan instead of the traditional Memorial Day backyard grill.

Named in honor of Magic’s Pub on Westhampton Beach, where I first cooked professionally, this is my first memory of a really great restaurant hamburger and the first burger I ever learned how to make. What made the burger at Magic’s, an Irish pub, different is that it came on an English muffin. Practically, it makes a lot of sense. Once the muffin’s toasted, the nooks and crannies in the bread catch all the juices from the burger without losing crispness.

You may have to toast the English muffin twice to really develop those crunchies. The muffin-to-burger ratio is also nice, as is the contrast of textures from soft and toothsome to crispy crunchy. As always, give the burger time to develop that crunch brown crust; it’s essential. Crispy bacon is also required. The cheddar is New York sharp, and the bacon adds a little Irish touch. The garnishes for a Magic burger are some soft butter lettuce, a nice thin slice of an in-season tomato, and a thin slice of red onion.

Pat the ground sirloin into a thin patty, a little bit bigger than the English muffin. Smear the butter over one side and season that side of the patty with salt and pepper. In a pan over high heat, heat the oil. When the pan is hot, pour out the excess oil.

Put the burger, buttered-side down, in the pan and cook until it is brown and crusty, 4-4 ½ minutes. Season the top side of the burger with salt and pepper and baste it with the fat in the pan.

Split the English muffin with a fork and toast it until it’s golden brown and crisp.

This article was originally published in 2017, but the burger is still awesome.