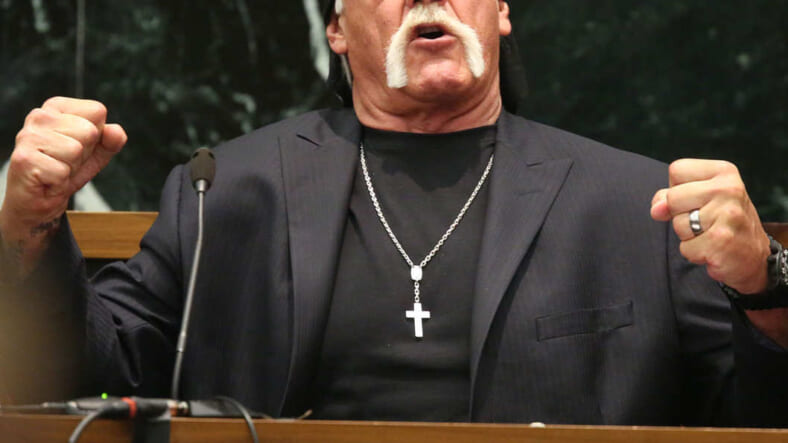 We just thought we’d take a minute or so to remind you that Terry Bollea, aka Hulk Hogan, is kind of an asshole. But that shouldn’t surprise you, unless you’d forgotten about the audio from a leaked sex tape he made with Heather Clem, the wife of Hogan’s then friend Bubba “The Love Sponge” Clem, that revealed that he’s a bigoted racist and homophobe.

Well, now you can finally listen to the leaked audio clips that ended the Hogan’s tenure with the WWE and indelibly marred Hogan’s status as a wrestling legend when they partially appeared in the National Enquirer about a year ago. Death and Taxes was able to acquire the unsealed FBI audio recording of Hogan and his attorney David Houston watching and discussing parts of the tape together.

The entire recording is about three and a half hours long, but Death and Taxes zeroed in on Hogan’s appalling tirade, which was directed at his daughter, Brooke, for apparently been spending time with a black music mogul who was offering to put up money for her career. At one point, Hogan tries to explain how he is racist “to a point” which is not only awful, but also illogical

But the worst part by far is this exchange between him and Clem, transcribed by Death and Taxes:

The whole clip is about 2 minutes long, and you really only need to list to it once because, again, it’s awful.