Sarah Silverman Gets Hilarious Lesson in Bald Eagle Anatomy in Exclusive ‘I Love You, America’ Clip 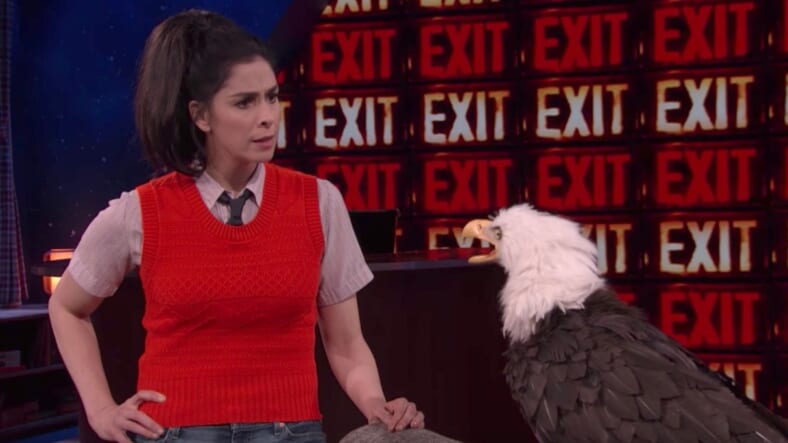 Sarah Silverman‘s Hulu comedy series I Love You, America aims to bridge the country’s cultural and political divides with the help of Silberman’s absurdist brand of comedy.

In an exclusive new clip from an upcoming opening monologue, Silverman (who, incidentally, was a Maxim cover girl back in 2007) explains that “we should learn about the things we fear so that we can decipher between actual danger and what is just a knee-jerk reaction to something that is simply unfamiliar to us.”

For Sarah, that would be learning about the anatomy of America’s national bird, the Bald Eagle, which as it turns out… only has one hole for both reproductive matters and dropping turd bom.

“One Hole for All,” Sarah puts it.

“You have a specific hole for each thing that comes out of you. What luxury!” a talking bald eagle who interrupts her opening remarks explains to Sarah. “Meanwhile, I don’t know if I’m shitting or laying an egg.”

Watch the clip above for the funniest performance by a Bald Eagle puppet you’re guaranteed to ever see.

I Love You, America With Sarah Silverman streams each Thursday on Hulu.