In Defense of ‘Flaked’

Is Will Arnett’s new Netflix show really that bad? 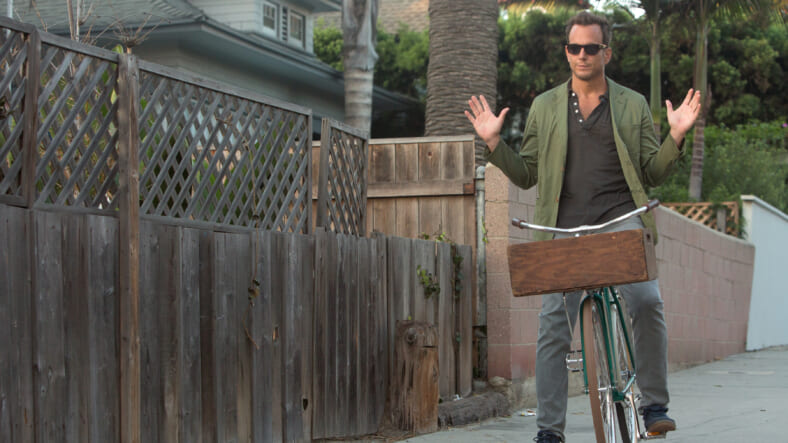 Everyone seems to hate Flaked, Will Arnett’s Netflix comedy (or traumedy, as we’re calling them now) about a bike-riding recovering alcoholic who lived through the worst case scenario and came out on the other side. Sure, the last thing we need is another show glorifying men who behave badly. But Flaked has been reviewed so harshly that I couldn’t resist checking it out, out of morbid curiosity. And much to my surprise, I didn’t think it was that bad. At all.

In many ways, Flaked is a de-glamorized version of Californication. Both series are set and filmed in Venice, California; both protagonists are generally shitty people who hurt others with their reckless and selfish behavior. But Chip (Arnett) does not have (much) money to throw at problems or an army of handlers to clean up his messes. Often, they aren’t cleaned up at all — just like Chip, who secretly drinks even as he’s hailed as something of a recovery guru of the Westside.

Where most TV shows and movies about substance abusers build their characters around the substance abuse, Chip’s drinking (which he does so little of that no one suspects) is only one in a tapestry of pathologies. The addicts and the recovering and the sober and the social drinkers all intermingle on Flaked, and no one is judged based on their relationship to booze or drugs. Chip is bad because he’s bad, not because he’s a drunk. And the show doesn’t demand, or even expect, that we like him. If we’re rooting for him, it’s because we want him to stop hurting people we do like, like Chip’s best friend and housemate Dennis (an excellent David Sullivan).

Flaked does not get everything right. There is painful dialogue (like “there’s no selling out, only buying in”) and cringeworthy scenes, like Chip coming across graffiti of the word “life” and pausing to reflect. And that time he borderline prostitutes the woman he’s interested in to a potential investor. The way that the men of Flaked treat women is abominable in a way we’ve grown too accustomed to seeing, and as a rule, the women are far, far too forgiving — to the point of absurdity. But in one case, a mid-season reveal changes the narrative in a way that is simultaneously surprising and reasonable, and gives one woman a bit more dimension than we might have initially believed. There are other instances in which Flaked takes its time explaining relationship dynamics that feel a little off, a little incomplete. The payoff is worth the wait, and gives the audience time to come up with their own clues about backstories.

And the central characters have backstories in spades — more than is typical for your average early forty-something guy. Years of addiction typically yield plenty  of anecdotes, from the amusing to the horrifying to the tragic. And there’s a particular loyalty and an intimacy within the recovery community that bonds the recovering addicts towards a common goal: Another day of sobriety. What might elsewhere be a friendship-ending betrayal isn’t here, because the stakes for giving up on someone are just too high.

Flaked premiered around the same time as another Los Angeles-based Netflix comedy, Love, which was produced by Judd Apatow. Both shows are about irresponsible white people with substance abuse issues, but Love has been much better received, even though the premise is eye-rollingly familiar: Schlubby neurotic guy wins the heart of the hot, self-destructive girl — each are only half-likeable, but we are supposed to root for them as a unit. Maybe I’m getting too cynical, but I guess I’d prefer to take my unredeemable characters straight up.