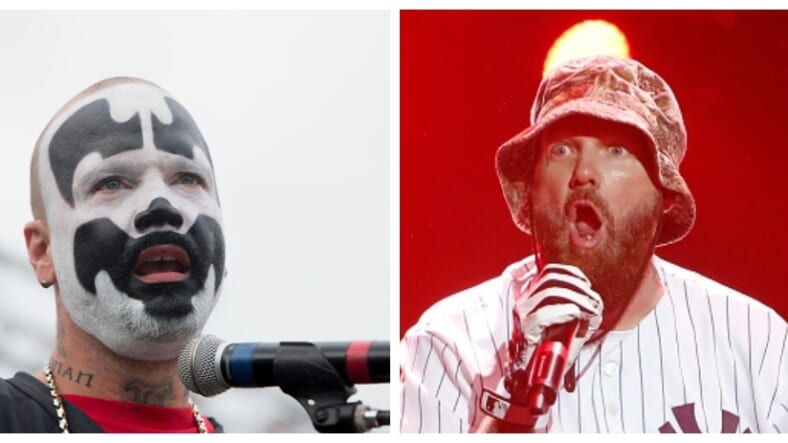 For a man who is part of a group that frequently sings about their love for their axes, it was a decidedly foot-to-ass affair.

Well, it would’ve been foot-to-ass if anyone had actually landed a blow.

But no. Drunk on his beloved Faygo, Mr. 2 Dope took to the stage and launched a kung fu-flavored assault on Mr. Bizkit that didn’t land him anywhere but in the loving hands of venue security.

This attack wasn’t random. Limp Bizkit had just finished their cover of George Michael’s “Faith,” and that song allegedly triggers a microchip in Shaggy 2 Dope’s brain that makes him want to kung fu everything insight.

No, that’s not true. At least we hope it’s not.

Citing Reddit, the most authoritative source on hilariously stupid music feuds out there, Newsweek reported on why Shaggy 2 Dope was motivated to launch his assault in the first place:

“Well it all started 20 years ago when ICP was trying their hardest to sell out,” wrote DanyDoomzday. “They performed at Woodstock and after was told ‘Fred wants to meet with you’ they had no idea who the f*** Fred was.“I guess Fred Durst was a mega superstar and egoed out on them hard like wouldn’t look at them or anything while he talked. He invited them on the Family Values tour with Korn and all those bands then at the last minute told them to f*** off outside and booted them. “They were on this huge festival show Monster sponsored together and I’m assuming he was a c*** again.”

Monster turned these men into monsters.

In all seriousness, Fred Durst should consider himself lucky. ICP sings lyrics like, “My axe is my buddy, don’t take him for a chump/Me and my axe will leave you hopping on a stump.”

Luckily for the Limp Bizkit leader, there weren’t any axes in sight. This time.