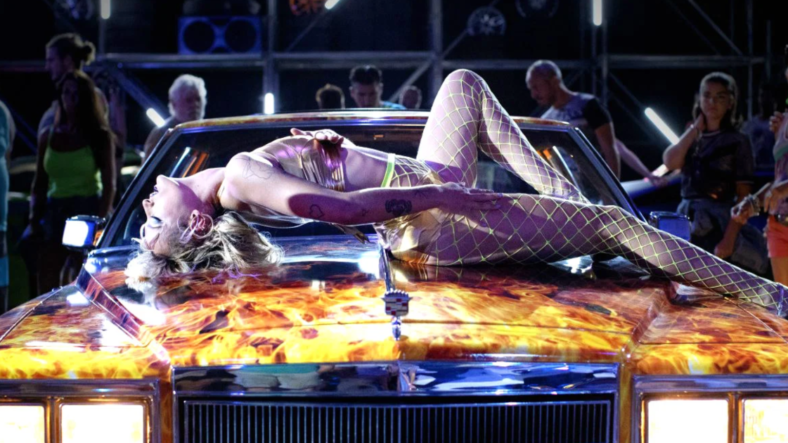 The top prize at the Cannes Film Festival, the Palme d’Or (Golden Palm) has in the past gone to movies like All That Jazz, the Coen Brothers‘ Barton Fink, and David Lynch‘s Wild at Heart. This year the award went to French filmmaker Julia Ducorneau’s Titane, a flick you won’t be able to figure out — at all — from the insane trailer above.

It’s just 1:40, shorter than many trailers, but it seems longer. It also feels like watching a selection of dream images pulled from the brain of someone who got into some extremely good LSD.

There’s the dancer getting extremely sexy on a car, seen in the still above, many strange flashing images of fire, a shaven-headed kid in some kind of metal truss, a shirtless older guy in distress, momentary snippets of characters in the nude, seen from a distance…it’s clearly not the kind of movie to take your grandma to.

But it wasn’t until after the Palmes d’Or win that the film’s distributor, Neon, released anything like a synopsis. Here it is: “The film centers around Alexia (Agathe Rousselle), a serial killer impregnated by a car who disguises her gender and goes incognito as a lonely fireman’s (Vincent Lindon) long-lost son.”

The film […] revolves around a woman who has sex with cars after growing up with a metal plate in her head from a car accident. The body-bending horror also features Garance Marillier, Laïs Salameh, Mara Cisse, Marin Judas, Diong-Kéba Tacu, Myriem Akheddiou, Bertrand Bonello and more.

While movie critics tend to love anything that’s radically new and doesn’t adhere to the Hollywood playbook — which involves fairly predictable dramatic beats in even the glossiest-looking, arty films — it’s hard to ignore the fact that many who have seen Titane so far have given it incredibly glowing reviews. Here are just a few comments from reviews collected at Rotten Tomatoes:

Titane will hit theaters in all its apparently thrilling weirdness in limited release on October 1, 2021.