In honor of his passing, enjoy our no-holds-barred interview with the iconic comedian. 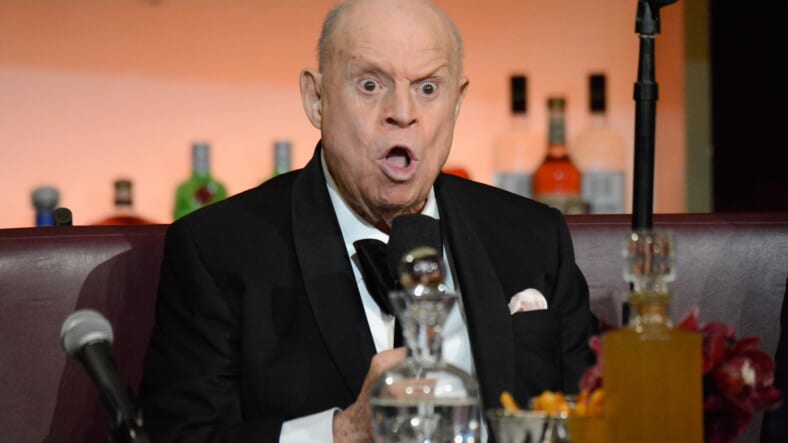 Oh, sure, it was years ago. In those days it was Dean Martin and Frank Sinatra and Sammy Davis Jr. who did the roasting.

Frank Sinatra was known as a tough guy. Were you ever scared of him?

Well, what I did with Frank not that many people could do. He’d come up to me at dinner, and I’d say, “Frank, I’m talking!” He’d start laughing like crazy. He respected me, and I respected him.

Nobody. We had a great camaraderie. In fact, the highlight of my career was being at the inaugural gala of Ronald Reagan, and I owe that to Mr. Sinatra. Frank told them I was going to perform with him. They said, “No, Frank.” He said, “Let me put it this way: If you don’t have Rickles, you’re not gonna have me.” I’ll never forget that.

How many presidents have you met over the years?

I met them all, except Jimmy Carter. Bob Newhart and I tried to visit him in Washington, but he just left his sweater on the chair. We never got to see him.

Have you met President Obama?

No, I haven’t. It’s a shame he’s not going to have the opportunity to meet me. With my reputation, a lot of people—even important people—are afraid. But I’ve never been mean-spirited, in my opinion. I never did anything below the belt.

What’s the trick to a perfect insult?

There’s no trick; it’s an attitude. Even when I was in high school and the Navy, I was the guy who could rip somebody and they’d laugh at it. It’s nothing you can rehearse—it was just in my personality. By the way, I was nice to the people in the Philippines for the two and a half years I was there, because I knew eventually I’d have to kiss up to them so my grandchildren could have toys.

How did you become an insult comic?

I worked as a comedian in real tough joints in the old days, with striptease artists and what have you. They’d ask when the girls were coming on, and I’d say, “Listen, you see that shirt? Get rid of it, you’re ridiculous!” I’d start to talk to the audience, and it worked for me. Also, I’ve never had a writer, and I’m proud of that. Everything I’ve per­formed has been from my own head.

Have you ever gone too far?

After over 50 years of headlining, I’ve been received very beautifully. But I always say, when you’re onstage you can’t please everybody. I’m sure there are people who may not take to what I do, but that’s OK. Thank God the majority are in my corner. Otherwise I wouldn’t make enough money to feed my hunting dogs.

Where did you get the nickname Mr. Warmth?

From Johnny Carson. He was another hero of mine. Every time we were together, it was like chemistry.

You’re the voice of Mr. Potato Head in the Toy Story movies. Are you a fan of those?

Well, sure. I busted my bird for 60 years in the business, but my grandkids only know me as Mr. Potato Head.

Are there any bad habits you’ve given up?

I stopped smoking. But my personality I still have. I get up in the morning and not everybody loves me, so if you want to call that a bad habit, there’s that.

Do you have a signature drink?

Vodka on the rocks.

Do you remember the worst hangover you ever had?

Remember? No. In the Navy we had trou­ble finding the ship, for crying out loud!

You’ve been married for 48 years. What’s your secret?

Listen, the greatest advice is to be dear friends and care about each other. So many young people think the big sex act is the whole movie, but that’s not the case. You need to be able to talk and laugh and cry together. By the way, you never thought I was this nice, right?