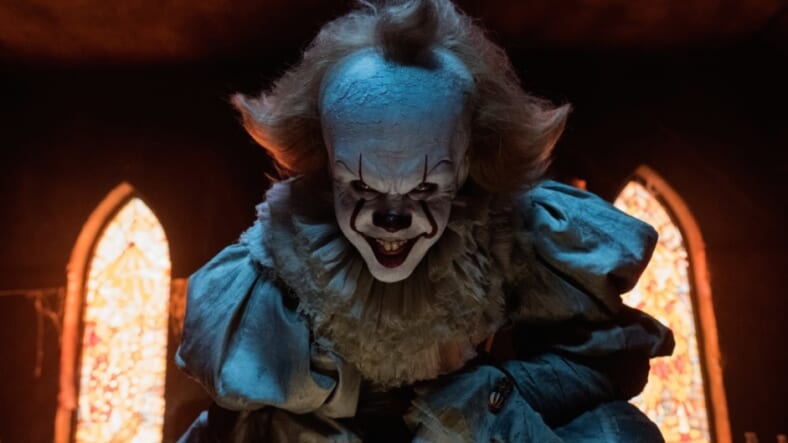 Ever since we saw the first trailer, we knew IT would be some scary shit. There’s no guessing as to why the professional clowns of America are so pissed ahead of its release—they know too.

Maxim caught an early screening of the upcoming reboot, out Sept. 8, and we can in good faith confirm what Stephen King has already said about the film: IT is very good and very, very scary.

IT is easily one of the best Stephen King adaptions ever made, and director Andy Muschietti has imbued it with a distinctive sense of childhood wonder. Pennywise is every bit as nightmarish as you remember, and he’s only gotten nastier and more inventively cruel since the 1990 miniseries.

Here, six reasons the IT reboot is the most terrifying movie we’ve ever seen:

1. That brutal opening sceneThat iconic opening kill—poor Georgie being dragged into the sewer by a giggling Pennywise—is shockingly violent and genuinely upsetting. Unfolding in the first 10 minutes of the film, it’s a quick jolt of violence that establishes fear and dread to last the rest of the two-hour screen time.

2. Those teethOne of the images burned into the minds of anyone who caught the 1990 IT miniseries is Pennywise flashing his razor-blade teeth as he goes in for the kill. Director Andy Muschietti makes nightmarish use of modern CGI to up the ante. When Pennywise prepares for a fresh kill, his jaw extends to reveal never-ending rows of teeth—a visual you’ll never forget.

3. Bill SkarsgårdTim Curry’s take on Pennywise was all in the voice, whereas Skarsgård’s is in the body. His jagged body contortions and drifting lazy eyes give Pennywise a much more unhinged and mercurial nature. When he transmutes from a giddy childlike clown to a flailing predatory beast, the shift is incredibly jarring.

4. You really like the kidsWhat will most surprise, and delight, audiences is how genuinely affecting the story is. The dynamic between the children, played without a weak link by a talented cast of kid actors, is effortless, hilarious and oftentimes poignant. You’ll recognize yourself in every member of the Loser’s Club and will root for them at every turn.

5. New Kids on the BlockMuschietti bumps up the terror from the 1950s to the ’80s in order for the inevitable sequel—with the Loser’s Club as adults—to exist in modern day. Muschietti pays homage to the big-studio horror productions of the ’80s while also dropping clever pop-culture references for 30-and-up viewers. You never knew New Kids on the Block could be so scary.

6. The adultsThe boogeymen of Derry, Maine don’t end with Pennywise. If the adults of Derry aren’t willfully turning a blind eye to the “curse” of their quaint town then they’re physically or sexually abusing the children, namely Beverly. IT is really about children facing the horrors and cruelties of the world, a quieter aspect from the book Muschietti has vividly captured.

We’re already scared for the sequel.