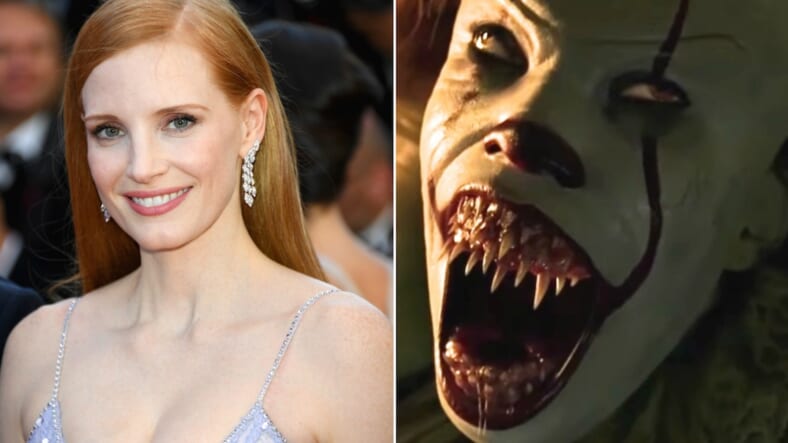 Oscar-nominated actress Jessica Chastain is “in negotiations” to star in the upcoming It sequel (she got the part), the first casting news from the highly-anticipated project.

Variety reports that Chastain will take on the adult version of Beverly, played by Sophia Lillis in the 2017 adaption, which became the highest-grossing horror movie of all time.

Andy Muschietti, who directed Chastain in the 2013 horror movie Mama, is back as director. Gary Dauberman (Annabelle: Creation and the upcoming Are You Afraid of the Dark?) will write the script.

“Jessica is an amazing actress and a very good friend and I would love her to play Beverly,” the director previously told Variety.

“She loves the movie and it feels like the planets are aligned in that sense, but we still have to make that happen.”

“There are a lot of ideas for the rest of the cast that I’m playing with, but it’s a bit too premature to say those names right now.”

Her and fellow redhead Amy Adams‘ names were bandied about for the role.

Bill Skarsgard is also expected to return as Pennywise, although the Swedish actor has yet to confirm the news.

Muschietti made the call to split Stephen King’s horror tomb into two movies, the first about the “Loser’s Club” as kids and the second following their traumas into adulthood.

“The thing I want to bring in the next film that I couldn’t do here is the dialogue between the two timelines,” he told Variety.

“That was so important in the book and we didn’t get to explore that here, but I wanted to keep the story of the kids as pure and without interference as I could.”

“The dialogue between those two timelines with all those flashbacks is so important to the book that I want to bring that back.”

The sequel is expected to hit theaters on Sept. 6, 2019, and production will begin this summer. So expect some more casting news soon.