The hottest party of Super Bowl weekend will also feature musical sets from Yo Gotti, Zaytoven and DJ Ruckus at a lavish event space in Atlanta. 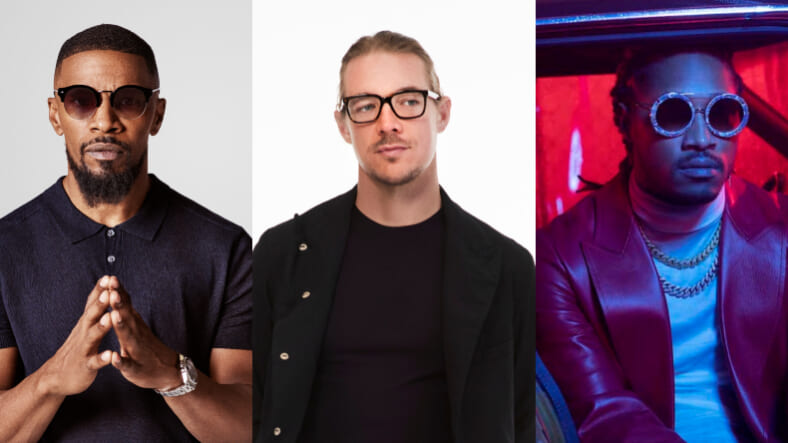 Jamie Foxx, Future and Diplo will perform at the Maxim Big Game Experience the night before Super Bowl Sunday in Atlanta.

This year’s soiree will feature an unforgettable evening of unique activations across 19,000 square feet of event space on Saturday, February 2 at The Fairmont, less than four miles from Mercedes Benz stadium.

Future’s performance will be an ode to the event’s theme, “ATL Royalty.” His chart-toppers include “Commas,” “March Madness,” “Jumpman,” and “Mask Off,” among others. Each of his last four studio albums – DS2, Evol, Future and Hndrxx – have also debuted at number one on the U.S. Billboard 200.

“I can’t wait to show out for my city at The Maxim Big Game Experience,” Future tells Maxim. “Atlanta ain’t ready for the vibes we bringing!”

Foxx, in case you didn’t know, is an Oscar-winning actor, comedian, musician and DJ. He released his first album in 1994, Peep This, which he also produced and composed.

In between his blockbuster comedy and acting careers, Foxx released his second album, Unpredictable, in 2005. It quickly shot up the Billboard album charts.

Grammy-award winner Diplo is one of the most sought after producers and DJs in the world, known for his genre-defying collaborations and smash hits including Silk City’s “Electricity” with Mark Ronson and Dua Lipa, LSD’s “Audio” with Sia and Labrinth, Major Lazer‘s “Lean On” with DJ Snake and MØ.

In addition, he’s worked with the likes of Beyoncé, Madonna, Justin Bieber, Bad Bunny, M.I.A. and many more.

Plus, there will be additional performances by Yo Gotti and DJ Ruckus and Atlanta DJ Rootsqueen. Atlanta music producer Zaytoven will DJ and deliver a special performance that takes guests through his trap history.

This iconic evening will pay homage to Atlanta royalty with unique activations and A-list talent across 19,000 square feet of event space at The Fairmont.

AKG will present Zaytoven’s Basement Studio that incorporates all aspects of the multi-platinum legend making you feel as if you were in a room with icons like Gucci Mane, Future, Migos and Usher.

Guests will also enjoy an open bar featuring Pernod Ricard’s Chivas Regal® Scotch Whisky and additional lines in their diverse portfolio and light bites throughout the evening courtesy of Georgia-based Waffle House® restaurants which will serve a variety of savory and sweet menu items in the venue until midnight and then via a full service food truck directly outside of the venue until 2 a.m., exclusively at The Maxim Big Game Experience.

Guests will have access to a flavor lounge courtesy of blu, a pioneer of electronic cigarettes. Amuze, an online flashsale website that features designer pieces with discounts up to 70 percent, will showcase a preview of what you will see at their warehouse pop-up shops.

The Maxim Experiences are a joint venture between Maxim and global marketing agency Lagardère Sports and Entertainment.

In the Know Experiences is the event’s exclusive hospitality partner and will oversee all VIP operations and experiences. The event is supported by 1Iota Productions, Ashley Avery Agency and Atlanta-based sports agency SportsTrust, who will have a dedicated VIP section.

The Maxim Big Game Experience is produced by Lagardère Sports and Entertainment and Rooftop2 Productions. In the Know Experiences is the event’s exclusive hospitality partner and will oversee all VIP operations and experiences. Clique Hospitality’s premiere rooftop nightlife venue in Las Vegas, APEX Social Club of PALMS Casino Resort, will take over the ultra-exclusive balcony.

The event is supported by 1Iota Productions Ashley Avery Agency, Atlanta-based sports agency SportsTrust, who will have a dedicated VIP section, and Waffle House.