Jason Momoa Got Even More Jacked for ‘Aquaman’, And Everything We Know About the Venom Movie 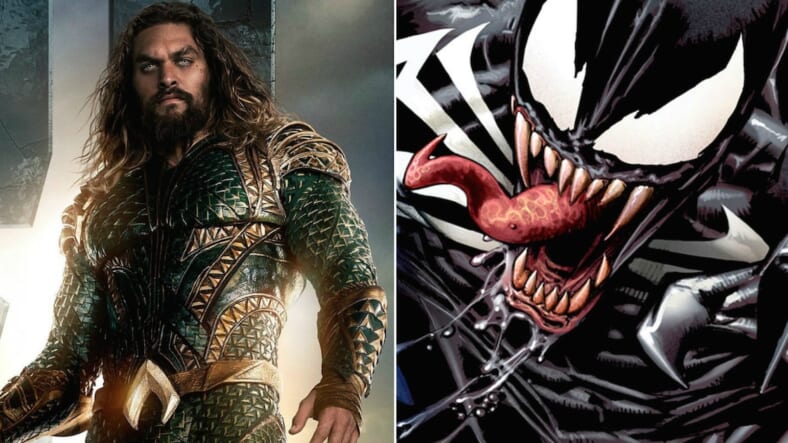 Entertainment Weekly just unveiled a first look at Jason Momoa in the upcoming standalone Aquaman film… and the photo is making a splash online.

Sure, you’ve already seen his Aquaman in Justice League… but never this jacked, tatted and prepared for aquatic ass-kicking.

“Aquaman has been the joke of the comic book world, but the more I thought about it, the more I thought how cool that would be,” Wan added. “Let’s take the character everybody makes fun of and do something really interesting with him.”

Star Momoa also revealed some of the plot.

“Justice League was only a weekend in Arthur Curry’s life. This is a totally different beast. In Aquaman, you see when his parents met and what happened to hem. Then the little boy being raised and finding his powers and going through that and never being accepted on either side. And then becoming this man who puts up all these walls. You just slowly see this man harden up and be completely reluctant wanting to be king and not knowing what to do with these powers he has. I think James Wan just killed it.”

There’s more happening in the comic world than this half-human, half-Atlantean fighting subaquatic scoundrels. Expect to catch that one on December 21, 2018.

At Comic-Con Experience 2017 in Sao Paulo, Brazil, director Ruben Fleischer (Zombieland) also revealed the inspiration for his upcoming Marvel Venom movie, where Tom Hardy will take on the titular role.

The movie will be based on two Venom comic books from the 1990s: Lethal Protector and Planet of the Symbiotes. Collider detailed the plots of each, and how they’ll inform the movie:

Venom: Lethal Protector is a six-issue comic book series by David Michelinie and Mark Bagley that was released in 1993. The story sees Venom and Peter Parker agreeing to leave each other alone as long as Venom doesn’t commit any more crimes, so Venom packs up and leaves NYC for San Francisco—indeed, Hardy revealed that this Venom movie takes place in San Francisco. In the comic arc, Venom ends up teaming up with Spider-Man to tackle five new offspring of the Venom Symbiote: Scream, Phage, Riot, Lasher, and Agony. But we know that this movie will not feature Spider-Man—at least not Tom Holland’s Spider-Man—so don’t expect a 100% comics adaptation.Planet of the Symbiotes, meanwhile, was a five-issue comic arc written by Michelinie that was published in 1995 under the Amazing Spider-Man banner. That story found Earth invaded by an army of symbiotes with Venom teaming up with Spider-Man and Scarlet Spider to stop them.

At least expect some crossover with other Marvel characters… on October 5, 2018, when Venom is expected to hit theaters.