“That’d be amazing. I love that movie!” 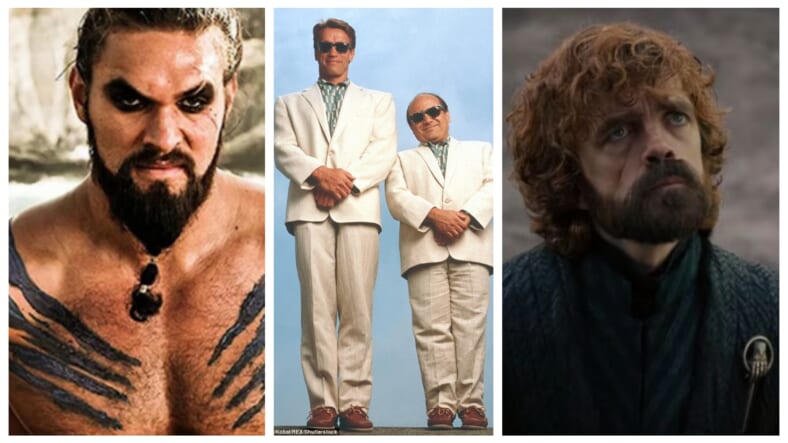 The 1980s brought us many great things: hair metal, parachute pants, and Members Only jackets, just to name a few. But perhaps most importantly, it also brought us the immortal Arnold Schwarzenegger-Danny DeVito buddy comedy, Twins.

It’s a semi-cult classic that still gets some love from retro-loving comedy geeks. Could it be the latest ’80s movie to get a reboot? Well, ever since Jason Momoa said he would be down to reprise Arnold’s role, with his Game of Thrones co-star Peter Dinklage stepping into Danny DeVito’s tiny shoes, it doesn’t seem out of the question.

When a fan suggested the reboot during an “Aquaman Live” panel discussion, Momoa reportedly responded: “Fuckin’ tell me where to sign! Absolutely. That’d be amazing. I love that movie.”

Momoa added that Dinklage was “amazing,” and joined in with the moderator suggesting that Twitter users should try to make the idea a reality, reports Comicbook.com.

Just in case you need a Twins refresher, Schwarzenegger and DeVito play fraternal twins named Vincent and Julius who were separated at birth in the 1987 flick.

They were created via a biological experiment, and the shady folks behind it told their mother (Bonnie Bartlett) the babies had died.

Years later Vincent (DeVito), an unscrupulous street hustler, ekes out a living in Los Angeles. Julius (Schwarzenegger), raised by a scientist (Tony Jay), grows up humble, intelligent and strong, but very naive about the larger world.

When Julius learns of his mother and brother, he heads to Los Angeles to find his family.

Momoa, who recently expressed interest in playing Wolverine if Marvel ever reboots that franchise, will appear in an upcoming Cliffhanger remake as well as Aquaman 2.

Dinklage reportedly has a remake of The Wild Bunch in his future, as well as vocal performances in The Angry Birds Movie 2 and The Croods 2.

And don’t forget, Schwarzenegger once teased a Twins sequel called Triplets co-starring Eddie Murphy. Think all of this sounds too good to be true? Guess we’ll have to wait and see.