“You guys look more nervous than a long-tailed cat in a room full of rocking chairs.” 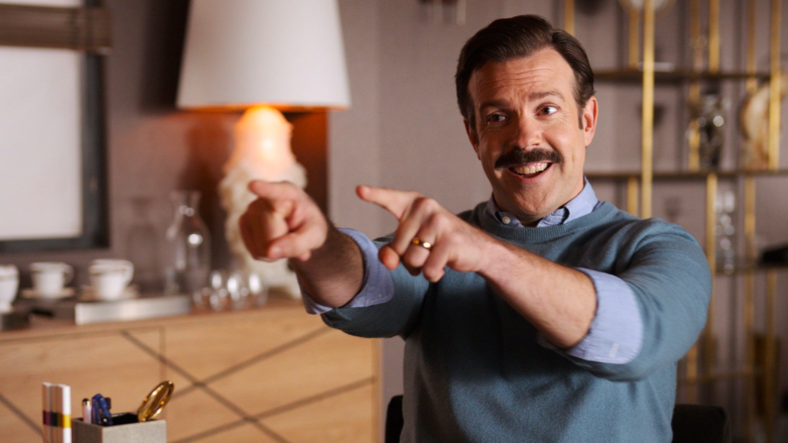 As Ted Lasso, the title character of the hit Apple TV+ series by that name, Jason Sudeikis anchors a sometimes surprisingly moving fish-out-of-water comedy about an American college football coach suddenly saddled with coaching an English Premier League soccer team—though he knows nothing about what the English call “football.”

Sudeikis already nabbed a Golden Globe and a Critics’ Choice Award for best actor. He might put a few more statuettes on his shelf before awards season is over, as he’s also been nominated for Screen Actors Guild and Writers Guild of America awards. The reason for Ted Lasso‘s popularity, it turns out, has a lot to do with the character himself and his uniquely American approach to a very British pastime. It turns out Sudeikis created such an indelible persona from a very real inspiration: Donnie Campbell, who coached Sudeikis in basketball when the actor was a high school player in Kansas City.

From a paywalled article by The Athletic, here’s more about Ted Lasso‘s origins:

In the months after the show debuted on AppleTV+ last summer, interviewers kept asking Sudeikis about the coaches who inspired the title character, a college football coach who moves to England to lead a Premier League soccer team. He mentioned Wooden and Roy Williams and Bill Self and Pete Carroll and Steve Kerr and Jürgen Klopp — the coaches, he said, who care more about the person. But there was one other name he kept mentioning: Donnie Campbell.

It was those lines, the homespun ones, that stayed with Sudeikis. In an interview last summer with The Kansas City Star, he revealed that some of that folksiness seeped into Lasso.

[…] Back in 2013, when Sudeikis first created the character for an NBC Sports soccer commercial, he told [Sudeikis’s high school friend Brendan] Curran the inspiration came from three sources: “He was like: ‘You know, that character really is Donnie Campbell, Bill Self, Coach Taylor from ‘Friday Night Lights,’ all thrown into one thing,’ ” Curran said.

The same article reports that Sudeikis was a decent player for Campbell, too, with the former coach saying he “wasn’t a great athlete, but he understood the game.”

Anyone who ever had a good, even inspiring coach or teacher in high school can relate to the idea of their words and personality sticking with you to the point where they inspire an iconic fictional character.

As for Ted Lasso the series, it has already been renewed for a third season. The second season will premiere on Apple TV+ in the summer of 2021.