“It’s a movie that makes fun of sequels and remakes and reboots while being all three at the same time,” Smith says. 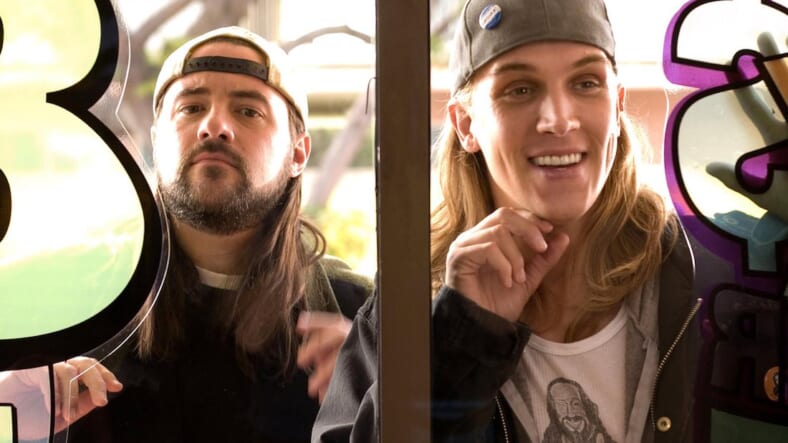 It’s been a little too long since Jay (Jason Mewes) and Silent Bob (Kevin Smith) appeared on movie screens in the flesh. Fortunately, on New Year’s day Smith confirmed that yes, they are now in “pre-pre-production” for the Jay and Silent Bob reboot.

Smith’s tweet (see below) didn’t come out of the blue—he first announced something was in the beginning stages over a year ago.

Spent the first day of 2019 having a #JayAndSilentBobReboot pre-pre-production meeting at our holiday-roomy @WeWork office! @JayMewes took this pic of me and @JordanMonsanto to both mark the moment and to document that we were the only dopes in Hollywood working on the holiday. pic.twitter.com/xTNrpN6OF6

Jay and Silent Bob were movie comedy fixtures throughout the 90s. They first appeared in Smith’s breakthrough movie, Clerks, and went on to star or co-star in Mallrats, Chasing Amy, Dogma, Jay and Silent Bob Strike Back, and finally, in 2006, Clerks 2.

Technically they returned in animated form in 2013 for Jay & Silent Bob’s Super Groovy Cartoon Movie, but the truth is, it looked like fans who might want to see the pair again were out of luck for a while.

In a 2018 podcast, Smith outlined the basic plot of the reboot: “In Jay and Silent Bob Reboot, Jay and Silent Bob find out that Hollywood is making a reboot of that old movie that they had made about them, and they have to go cross the country to Hollywood to stop it all over again.”

“It’s literally [Jay and Silent Bob Strike Back] all over again,” Smith said, “It’s a movie that makes fun of sequels and remakes and reboots while being all three at the same time.”

HAPPY NEW YEAR! May you accomplish all the things you dream of doing (unless you dream of hurting people)! 2018 was the year that almost killed me, but 2019 will be the year of the REBOOT! pic.twitter.com/IRlRcgmArY

In February 2018 Smith had a major heart attack and came very close to death. He ended up losing over 50 lbs afterward, which he’s apparently kept off.

As long as his ticker holds up and he’s feeling good, it looks like we’ll see a great return to form once he puts on his coat and ballcap and hits the big screen alongside Jason Mewes again.

The Jay and Silent Bob reboot doesn’t have a release date, but it’ll likely hit theaters in late 2019.