This Shaggy-Haired Bartender Is Killing It on ‘Jeopardy!’, And He Just Revealed His Secret for Dominating 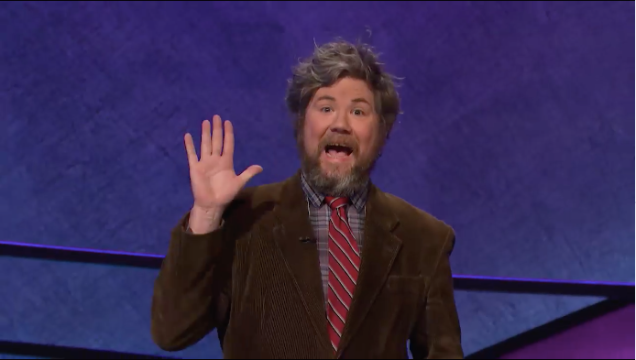 Anyone who has ever watched Jeopardy! knows that it takes the mind of a genius and a vast knowledge of random-ass facts to win. Seriously – no average Joe knows that kind of trivia.

This week, one sassy, bearded dude with an IQ that must rival that of Neil deGrasse Tyson has been steamrolling his way through the competition. He just won his sixth game in a row and has become a part of Jeopardy! history thanks to the highest six-day total the show has ever seen.

Austin Rogers, a bartender from New York City, has been winning insane amounts of money as well as the hearts of viewers, thanks to his quirky personality, goofy fist pumps, and insane wagers.

And when I say insane, I mean actually insane. He seriously gambles like crazy. Most competitors on Jeopardy! only wager something like $2,000, but Rogers over here is wagering sums like $34K, which has earned him a cool $257,700 so far.

ICYMI: Austin locked up his sixth win in a row with this massive wager. pic.twitter.com/4kF9A5y6ZJ

In a recent interview on Good Morning America, the NYC bartender dished on his secret to success, and apparently, it’s not as complicated as you might expect.

First off, Rogers credited his genes for his success (of course), but also to watching previous shows and paying attention to the answers. “I found ways to watch hundreds upon hundreds of episodes and while there’s no secret or code, if you watch enough, you’ll start seeing things repeat,” he said.

Well, no matter what his secret is, Rogers is a fan favorite, and I personally hope he never loses. I love him, and so does everyone else.

Dude. Austin the bartender is the best thing about 2017. #jeopardy #austinonjeopardy

You are now my favorite contestant ever.

May your reign be long and prosperous, Austin. Bless.