Pennywise’s favorite kids are all grown up. 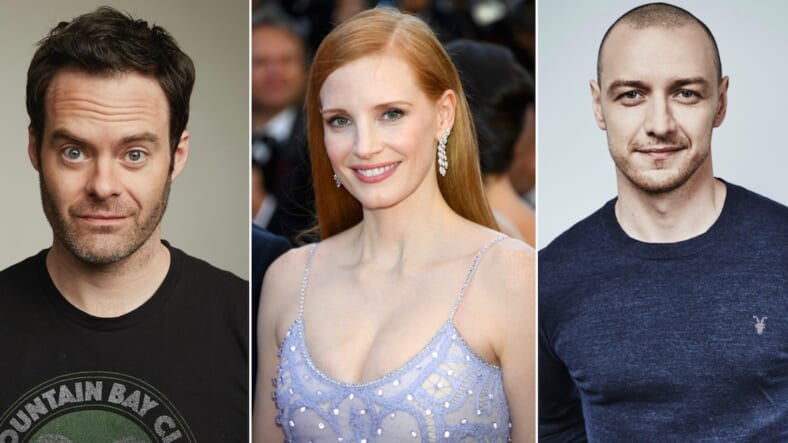 Anyone who read Stephen King’s IT knows that Pennywise rests for a couple of decades then comes back. By then the Losers Club are adults who have forgotten their childhood battle with the evil clown—then they slowly remember and come home.

Naturally, we can’t wait for the kids from the first movie to grow up, so filmmakers are busy casting the adult losers for IT Chapter 2. So far they include Jessica Chastain as Beverly (a perfect choice, too), and both Bill Hader and James McAvoy are circling the project.

Slashfilm reports on who may play whom:

If all goes according to plan, McAvoy will play the adult Bill Denbrough, former leader of the Losers’ Club – a group of kids from Derry, Maine who banded together to defeat the evil shape-shifting clown Pennywise (Bill Skarsgard). Jaeden Lieberher played the young Bill in 2017’s It. Hader, meanwhile, will play Richie Tozier, the motor-mouthed, dirty-joke loving member of the group, played in the first film by Finn Wolfhard. Chastain is playing the adult Bev Marsh, the lone girl in the Losers’ Club, previously played by Sophia Lillis…

Richie, who was played by Seth Green then Harry Anderson in the cheesy ’90s miniseries, would be a great role for Hader in particular.

IT was a mega-hit, topping box office charts for weeks. IT Chapter 2 will premiere on September 6, 2019, and if it’s even half as good, we’ll still be scared as hell.