Michigan’s Jim Harbaugh Is Having Sleepovers With Recruits 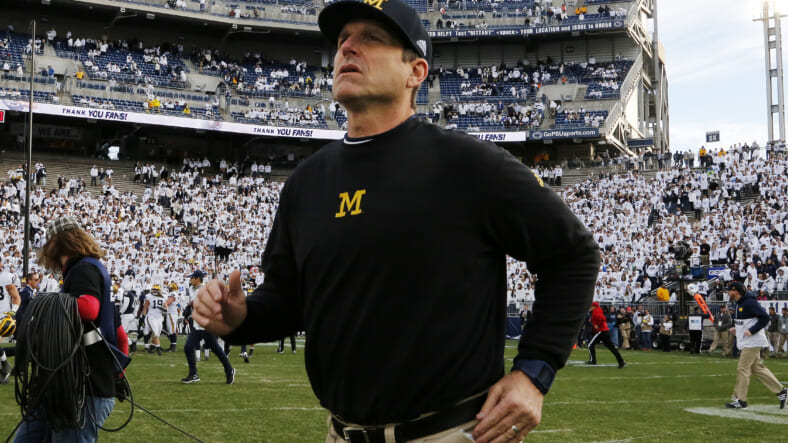 In the high-stakes world of college sports, coaches have been known to resort to some truly bizarre tactics to get high school kids to commit to their universities. But Michigan coach Jim Harbaugh looks to be taking things to a new low.

The khaki-wearing Michigan Man, who led the Wolverines to a 10-3 record in 2015, has started the 2016 recruiting season by inviting himself to sleepovers at the recruit’s home. Let that sink in for a second: Sleepovers. With Harbaugh.

Harbaugh’s first sleepover was at the home of the nation’s top high school kicker, who hosted the 52-year-old father of six and then brought him along to school the next day. That was last Friday, and now the coach, who has his own home in Ann Arbor, is moving westward for more sleepovers with more young men who can’t legally vote.

Odd as this may sound, Harbaugh’s shock and awe approach to recruiting is probably a good one. Highly-rated college recruits want to know they’re important to a potential future coach and what better way to show than by eating out of the same box of Lucky Charms in the morning? The efficacy of the sleepovers is so far unproven, but even if it manages to land Michigan a top recruiting class, we shouldn’t over look just how strange it is.

There’s no suggestion of sinister, NAMBLA stuff here, but there’s something q little undignified about having sleepovers with teenagers you want to impress. Harbaugh is a representative of a university and could afford the nicest hotel room in every town he visits. This move reeks of desperation and invites off-color jokes from football fans less refined than we are. But hey, at least it might make people forget about thirsty Michigan coaches writing love notes to the girlfriends of recruits.