The Colts owner is the latest NFL billionaire to deny football’s health risks. 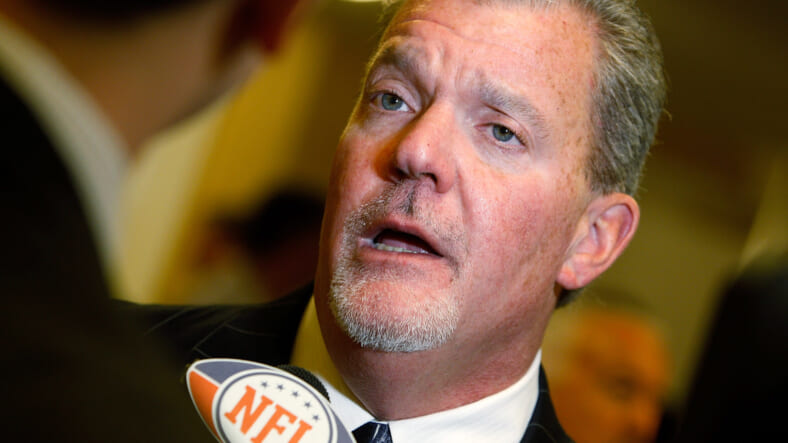 In the two weeks since the NFL’s VP for health and safety admitted a link between football and the degenerative brain disease CTE, several NFL owners have publicly cried foul. Cowboys Jerry Jones called the link “absurd.” Jets owner Woody Johnson played dumb. And now Colts owner Jim Irsay has downplayed the risks of playing football with a ridiculous comparison.

“I believe this: that the game has always been a risk, you know, and the way certain people are. Look at it. You take an aspirin, I take an aspirin, it might give you extreme side effects of illness and your body … may reject it, where I would be fine. So there is so much we don’t know,” Irsay told Sports Business Journal.

Irsay’s overarching point is fine. The effects of playing football ARE different for different people, just like their reactions to medications. But that’s about where he stops making sense. Irsay is implying that football presents no inherent risk, that it only negatively effects those who “reject it.” And in the case of football, “it” is repeated blows to the head. Unlike aspirin, no one is “fine” after a career in football. Some of are just better off than others. What’s more, aspirin isn’t controlled by a monopoly that’s previously covered up its harmful effects while raking in billions of dollars in profits. The NFL, on the other hand…

Irsay had other dumb things to say in the interview, including this deliciously asinine critique of those who keep harping on the dangers of football. “Football is so popular, people know they can sell their story in a newspaper form or a rating on TV, so they use football because what they are more about is the business of, you know, selling newspapers or seeing commercial time on TV. … Everyone has their own self-motivating motive,” he said.

And he’s right! Everyone does have a “self-motivating motive,” including the billionaire owner of an NFL franchise who’s net worth is almost entirely tied to the team that his daddy gave him.