The flamboyant former zookeeper is rolling out a “Joe Exotic” strain of cannabis, edibles and CBD products. 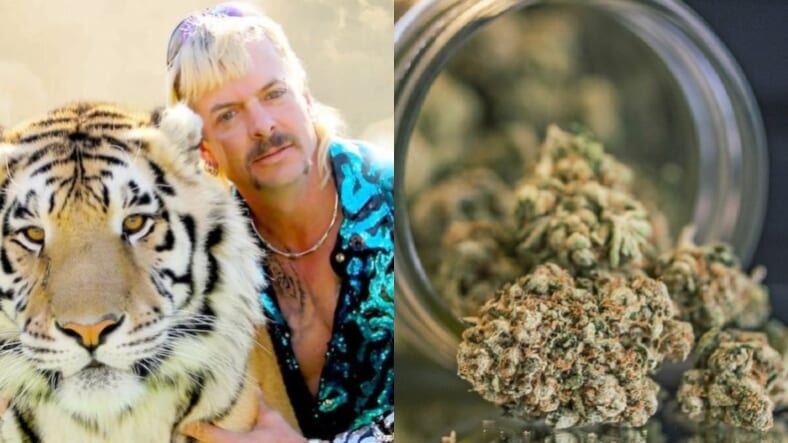 Joe Exotic of Netflix’s Tiger King series is launching is own marijuana brand from his Texas prison cell.

The former big cat keeper and pandemic-era reality show icon announced that his attorney signed a licensing deal with THC Group and Cannabis to roll out a line of Tiger King-branded cannabis products in Colorado, California and his former home state of Oklahoma.

…of Oklahoma. They will include edibles and various top shelf exotic strains. The products will be sold in dispensaries in these three states. It’s the Joe Exotic strain of Cannabis, CBD and Edibles.

Ask your dispensery for a Joe Exotic and smoke a Joe.

“They will include edibles and various top shelf exotic strains. The products will be sold in dispensaries in these three states. It’s the Joe Exotic strain of Cannabis, CBD and Edibles,” Exotic, who’s real name is Joseph Maldonado-Passage, wrote on his official  Twitter page. “Ask your dispensary for a Joe Exotic and smoke a Joe.”

Small told TMZ that Exotic is directly involved in the business through phone calls and emails. The mullet-wearing wildlife handler reportedly wants to help people with various ailments find relief with his cannabis line and a share of the profits will reportedly go towards captive tiger care.

As Newsweek notes, Exotic is currently serving a 22-year sentence after being convicted of murder-for-hire and 17 wildlife charges in 2019. Prosecutors from the U.S,. Attorney’s Office maintain that he paid $3,000 to have someone murder rival big cat activist Carole Baskin, but Exotic’s attorneys claim he was framed.

If too many tigers in America seems to be Tim Harrison’s and all the animal rights peoples’ issue, why in the hell does Carole Baskin and Pat Craig keep shipping in more to raise money on? Scam Alert? Big Cat Safety Act won't protect Tigers. #JusticeForJoeExotic #tigerking pic.twitter.com/oulVwwBbb9

This isn’t the only product Exotic has hawked while incarcerated. In partnership with cryptocurrency club MORE and because this is 2021, the disgraced zookeeper will auction off several non-fungible tokens (NFTs) alongside physical items, including his pistol and holster, fringed leather jacket and pants, song recordings, and more.

“I hope whoever purchases my favorite belongings is able to give them a well-deserved home,” Exotic previously told Fox Business. “Being able to auction off collectibles makes me feel connected with the outside world, especially without my cats by my side. Whether you love me or hate me for what you think I’ve done, there’s no doubt that everyone wants a piece of The Tiger King!”