Celebrate the wildly versatile actor on his 53rd birthday. 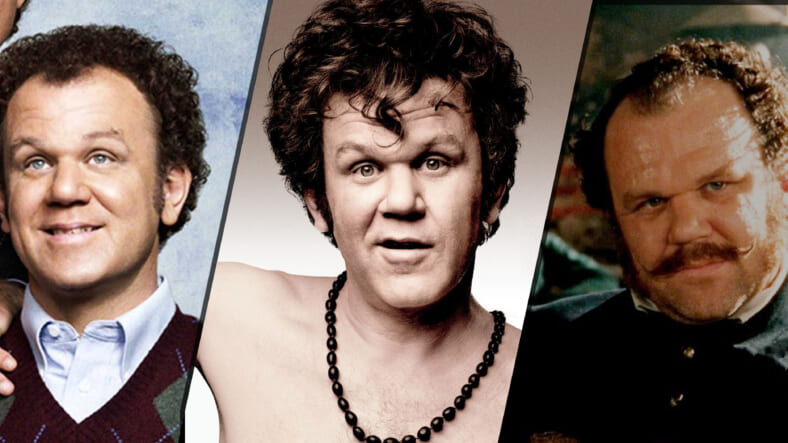 John C. Reilly’s is turning 53, and to celebrate one of the best actors of our time, we’re breaking down his top ten roles ever. From friendly foil to comedic powerhouse to lovable loser to stoic straight man, here are our favorite high points from JCR’s killer career.

Our introduction to John C. Reilly came in the form of a supporting role in Days of Thunder as the member of Tom Cruise’s and Robert Duvall’s pit crew. It was the first glimpse we had of the naive, earnest, gentle roles that Reilly would find throughout his career and, even though it was small, it made an impression.

The first time we saw JCR bust out his vocal chops was as a man arrested for murder and playing second fiddle to a wife with lofty, starstruck aspirations and little love left for him. Reilly’s voice was perfect for the jazzy tunes in the 1920’s-set movie Chicago, and his rendition of “Mr. Cellophane” earned him a spotlight in the Oscar-nominated movie’s star-studded cast.

Playing the ultimate NASCAR sidekick, even when he’s stepping out from Ricky Bobby’s shadow to be his own man, Reilly’s role as Cal is a work of ad-libbed comedy genius. Goofy, loyal and always-hilarious, JCR’s take on Cal and natural flow with Will Ferrell were signs of even bigger things to come.

Supporting a cast of some very recognizable (and young) faces, Reilly’s role as Tucker added much needed levity to the heavy drama in What’s Eating Gilbert Grape, a movie that could only have been made in the odd moment in cinema history that was the early ’90s. Just when you feel like this movie is about to break you, Reilly comes in with a line to break the tension and we couldn’t imagine anyone else pulling it off as well.

This Tim and Eric Awesome Show spin-off may be the height of JCR’s ad-libbed madness. Supremely naive and ultimately awkward, Reilly’s signature character quickly became a fan-favorite, and soon Dr. Steve Brule had his own show where he explored many walks of life from a position of solitary weirdness. As the show progressed, so did the oddball and somewhat-horrifying details of Brule’s backstory, all tapping into the hilarious awkwardness that is a hallmark of anything Tim and Eric related. It’s a niche character that deserves love, even if JCR never brought him to the silver screen. Maybe one day…

Forget the fact that Ralph himself seems to have a look that’s genuinely based on JCR, with his big frame and unwieldy hair; Reilly’s voice is on full display here, playing the bad guy who only wants to do good and the straight man to a crazy cast of video game characters with equally impressive voice acting behind them. Reilly remains a standout here and solidifies his unique vocal talents as permanently recognizable, whether you see his face or not.

Somewhere between a Weird Al album and an Oscar-winning rockumentary there is Dewey Cox. Reilly’s starring role puts all of his wonderful versatility on display as he rocks out catchy tunes, gets some big laughs, tugs at heartstrings and parodies every single music industry trope while playing across from huge cameos every step of the way.

Not his only time in a Scorsese movie — he was also in the DiCaprio-headlined, The Aviator — Reilly’s presence in Gangs of New York as the on-the-take constable, Mulroney, is much more brutal and cruel, even if it still borrows some of the dimwittedness that Reilly channels so well in his roles. A testament to his talent, he plays against DiCaprio and Daniel Day Lewis — heavy hitters to say the least — incredibly well.

What can be said about Dale Doback, really? Step Brothers was an instant comedy classic, brimming with the laugh out loud moments, infinitely quotable lines and equally subtle humor that you may not catch until you watch it for the hundredth time (which we have). Reilly and Ferrell are firing on all cylinders in this one, and we can’t see where these two take Prestige Worldwide if they ever do a sequel.