‘John Wick: Chapter 3’ Will Have the Highest Death Toll Yet

Director Chad Stahelski says the kill count will be “slightly north” of the first two movies. 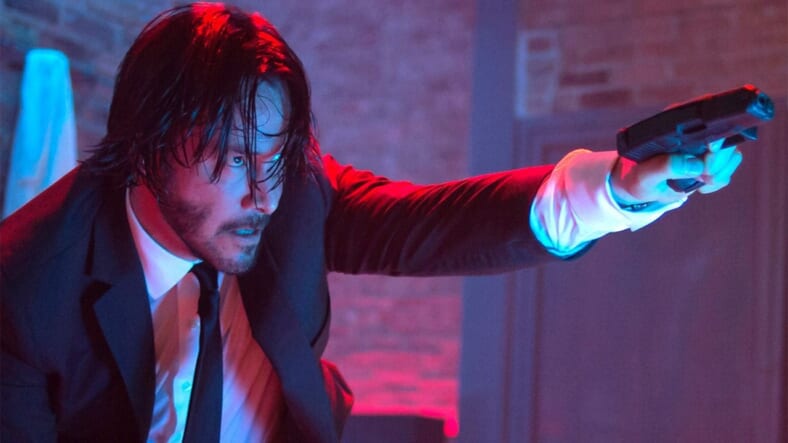 John Wick movies and murder go together like peanut butter and jelly. Really, really deadly pb & j involving bloodshed, bullets and all manner of mayhem. The title character is, after all, a (now reluctant) assassin.

As fan-assembled videos show—see below—Keanu Reeves‘ John does a whole hell of a lot of killing, using guns, knives, bare hands, and yes, even a goddamn pencil. EW reported that according to Chad Stahelski, director of John Wick: Chapter 3 (or John Wick: Parabellum) or whatever, the third movie will outdo itself, its death toll “slightly north” of the previous installments.

That’s is really saying something. Fans have tried to count up Wick’s previous kills. In the first movie, the number was at least 76, though David Leitch, who co-directed John Wick with Stahelski, said the number was more like 84.

The number nearly doubled in John Wick: Chapter 2, with a final death toll of 128, according to at least one source. That’s 212. If John Wick: Chapter 3 ends up with 140-150 dead fellow assassins and gangsters, then Wick, a.k.a. Baba Yaga, has taken out a whole neighborhood or even a very small town.

A reminder of where we are when the third Wick hits theaters next year:

John Wick (Keanu Reeves) is on the run for two reasons… he’s being hunted for a global $14 million dollar open contract on his life, and for breaking a central rule: taking a life on Continental Hotel grounds.

The victim was a member of the High Table who ordered the open contract. John should have already been executed, except the Continental’s manager, Winston, has given him a one-hour grace period before he’s “Excommunicado” – membership revoked, banned from all services and cut off from other members. John uses the service industry to stay alive as he fights and kills his way out of New York City.

A new image just published by Empire shows that Reeves’ dog-loving uber-killer is definitely in new territory in the movie as he is seen facing off with The Director, played by Anjelica Huston, who is a member of the High Table.

Reeves tells Empire that filmmakes are “trying to make it that there are different tribes, less nondescript assassins…Anjelica Huston is playing this Roma Ruska character.”

At the end of John Wick: Chapter 2, Wick told Ian McShane’s character Winston that he’d kill everyone who came after him. Based on knowing that and knowing that Wick has to escape New York to flee the bounty on his head, it’s easy to believe the death toll will definitely be pretty insane.

Seeing what Wick did with a pencil, it’ll be fun to see if he handles any of those many deaths with other school supplies.