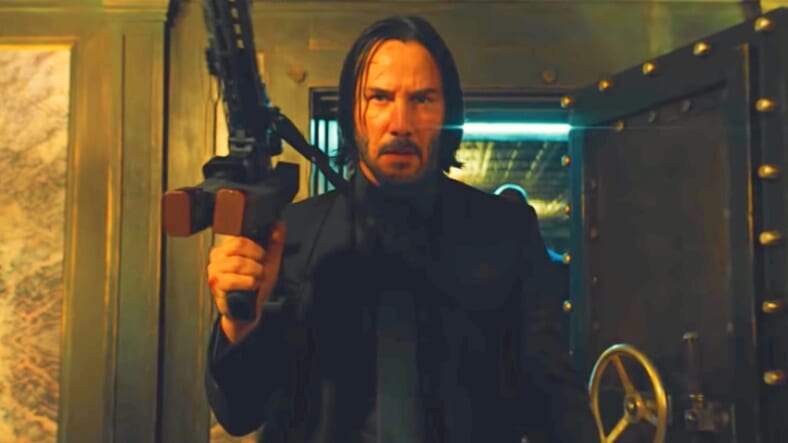 We’ve been anticipating returning to the assassin-filled world of John Wick, and filmmakers have finally dropped a taste of what we’re in for when John Wick: Chapter 3 – Parabellum—yes, that really is the title—finally hits theaters.

It’s not very long at all, but it’s enough to prime fans for the full-length trailer, which comes out Thursday.

In the 10-second clip we see John (Keanu Reeves) running down a city sidewalk in the rain, still hobbled from the events of John Wick: Chapter 2. Over the quick cuts a woman’s voice says, “John Wick. Excommunicado in 3, 2, 1…”

The video flashes through scenes of gun-wielding assassins, Laurence Fishburne’s pigeon-loving Bowery King looking menacing in the rain, sword-wielding killers on motorcycles, and finally, Wick striding out of a vault, weapon in hand.

His expression makes it obvious that by the time the final shot happens, Wick isn’t running from anything anymore.

Via Lionsgate, here’s the synopsis for Parabellum:

…Super-assassin John Wick (Keanu Reeves) returns with a $14 million price tag on his head and an army of bounty-hunting killers on his trail. After killing a member of the shadowy international assassin’s guild, the High Table, John Wick is excommunicado, but the world’s most ruthless hit men and women await his every turn.

John Wick: Chapter 3—Parabellum releases a full trailer Thursday, Jan. 17, and the movie is in theaters May 17.