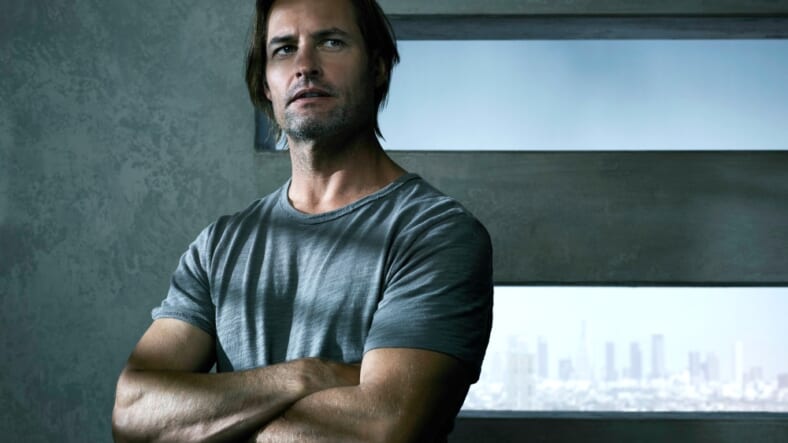 After Lost disappeared into purgatory back in 2010, everyone’s favorite anti-hero Josh Holloway continued on with life off the island. While the 46-year old actor has gone on to get his dirty up his hands in various roles since then (Mission Impossible – Ghost Protocol, Sabotage) it was only a matter of time before the mysterious plot twists and dire, unforeseen circumstances of USA’s Colony drew him back to the small screen, reuniting him with Lost executive producer Carlton Cuse.

The show, which focuses on a family’s struggle to survive in a colonized Los Angeles due to an unseen invading force, depicts the turmoil of life on opposing sides of the occupation and shows what people will do to protect the ones the love. As former FBI agent Will Bowman, Holloway is forced to cooperate with the invading force and hunt down members of the Resistance. It’s gritty, intense, and it could potentially have some extraterrestrial cameos down the road. What we do know is the reunion of Holloway and Cuse can only make for one thing: Great television.

The Colony star spoke with Maxim about working with Cuse again, comparing his new role to Sawyer from Lost, and what’s to come for season 2.

What about working with Carlton Cuse again drew you towards the project?Carlton and I developed a rapport working together on Lost. Ever since then, we had been looking for that next great project to collaborate on. When the Colony script came along, it was perfect timing and everything about the project was right. It’s that big storytelling and patient unfolding that Carlton is known for and we have this shorthand of working together for so many years.Sawyer was an incredibly popular character during Lost‘s run. Have you gone back and compared your new role of Will to your time playing that character?Will and Sawyer are very different characters. Sawyer was a con man and Will is first and foremost with more pure intentions of an upstanding family man. Approaching the character of Will, I can relate to him as a father myself because the situations that Will faces hit home with me as a parent.

Would you compare your isolation in Los Angeles to a similar feeling from being on the island, or are the extremes totally different?The isolation in Los Angeles definitely feels cut off because we’re part of a society where we have no say in where the boundaries are. At the same time, we want to know that there is something on the other side and crave that normalcy of what life was like before the wall.

There has been such an increase in shows/movies that focus on dystopian futures. How does Colony differ from those previously released?I think Colony’s story differs because it’s about an overly structured society whereas many past stories have been about chaos. The show poses questions about colonization and what you would do if you were in this situation  — collaborate or resist? One of the oldest stories in the book with a new enemy unlike one we’ve ever faced before.

Even with a hint at the existence of extraterrestrials, the show still focuses more on people and what happens when put in this serious situation. Where did Carlton (and co-creator Ryan Condal) draw from for the show’s premise?At its core, Colony is a human drama. Yes, there are mysterious occupants that have taken over, but it’s about how the people are affected and how they react. A lot of Carlton and Ryan’s inspiration came from a Nazi-occupied France and other occupied territories under military force.

With the show picked up for season 2, how much more are they willing to explore? Will things ever venture towards a territory that we might not have seen before?The creators Carlton Cuse and Ryan Condal have mapped out the story way beyond season one. I think viewers will have big pay off and a sense of what’s to come in the next couple of episodes and there’s definitely a turn of events in the finale on March 17.

Is there anything you’re hoping to do as Will that you haven’t done before?I really enjoy the physicality of the role in action scenes, but most of all, I am grateful to have the opportunity to work with Sarah again and also have an amazing partner in Carl Weathers on the show. The cast is top-notch and feels like a family. I can’t wait to get started on season two.