Rule Your Own Dinosaur Amusement Park in ‘Jurassic World Evolution’

We think putting the T-Rex cages next to the day care center is a *great* idea. 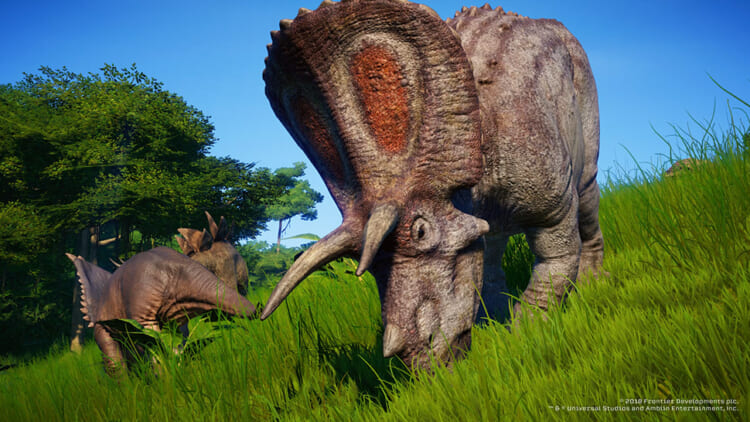 Chris Pratt and Bryce Dallas Howard return to theaters for another Jurassic outing this weekend, and we’re sitting here obsessing over the layout of our next dinosaur research lab in the dino park simulator, Jurassic World Evolution. It borrows conventions from other park simulator games, but pumps up the formula with great-looking graphics and a distinctly Jurassic spin.

The modern video game industry is quickly adapting its own version of Rule 34 — if it exists, there’s a simulator for it. We’ve seen Flight Simulator, Farming Simulator, Job Simulator and even Truck Driving Simulator… because someone, somewhere is getting their jollies from real-time cross country big rigging.

Aiming to breathe some pop sci-fi into the landscape of sims — and timed to go along with the blockbuster debut of Jurassic World Fallen Kingdom — Frontier Games has debuted Jurassic World Evolution. Distinctly borrowing from the feeling of the SimCity series, the game presents you with several Costa Rican islands as your canvas and challenges you to channel your inner John Hammond by playing god and reanimating over 30 different dinosaur species.

Of course, creating dinosaurs is the easy part. Laying out a park that runs calmly and smoothly, one that doesn’t fall prey to the catastrophic pitfalls of broken fences, hungry carnivores are dumb tourists is where the climactic moments lie. We played on PC and the game renders beautifully, whether you’re zoomed out for a macro view of your park or close up, hoping to spy a hiding raptor in the brush.

We also found it extremely intuitive to pick up the controls and get going thanks to well-defined conventions of the category being employed here. Fans of the simulator genre will certainly be into the long form and finer touches in the game but those looking for a more action-packed adventure, particularly gamers who would prefer to tear down their own enclosures to insure raptor claws sink into human prey may be left disappointed when the grisly encounter they’ve concocted for park visitors ands in a game failure.

Still, whether Jurassic World Evolution’s gameplay is up your alley or not, we can all agree that the silky smooth tone of Jeff Goldblum’s narration and instruction may have been one of the wisest decisions in all of video games this year. (Buy)