The Amazons in ‘Justice League’ Ditched Armor For Skimpy Bikinis, And Some ‘Wonder Woman’ Fans Are Not Happy About It

Another example of Hollywood sexism? 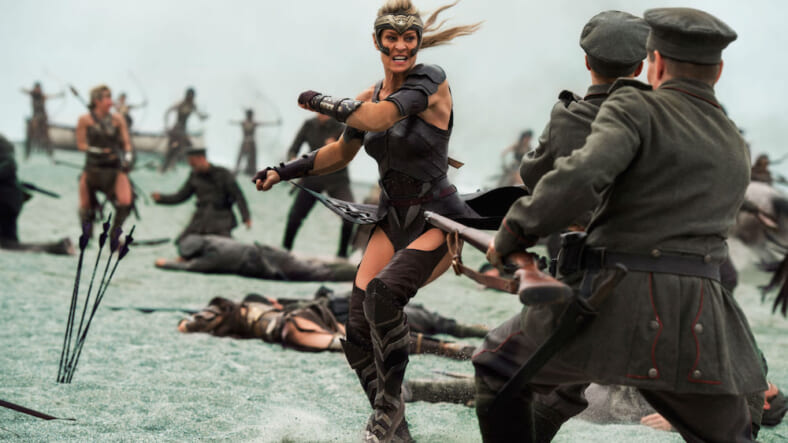 As excited as they were to see Gal Gadot return to the big screen in the upcoming Justice League, Wonder Woman fanatics are just as amped to see the Amazons of Themyscira kicking ass once more.

Still, fans are divided over their costumes in director Zack Snyders’ film. In a photo circulating on the Internet, they appear to be much sexier than they were in Wonder Woman.

Here’s a side by side:

Here is a fantastic example of the difference between the male and female gaze.
Patty Jenkins' Amazon warriors on the left. Zack Snyder's on the right. pic.twitter.com/fRDkV8dFLe

Surely, some superhero geeks out there are thrilled about this evolution in Themyscira’s dressing customs. But there are critics who think it’s sexist—that it’s no coincidence the costumes suddenly became sexier once a man was in the director’s chair (Wonder Woman was directed by Patty Jenkins, fyi).

"Let that sink in. The all-male Justice League team rejected already finished costumes to redesign and remake the armor so that more skin would be showing."@heroicgirls @heroic_dad FUCK. THAT. SHIT. #changetheratio #diversity #metoo #womennotobjects #unstereotype https://t.co/zrHmUE7uwt

They really changed the Amazon warriors outfits for justice league wtf. How are those bras and undies supposed to serve as body armor and protect them? 🙄 Men ruin everything.

I'm glad we have those new amazon outfits for #JusticeLeague because now there's visual evidence of what happens when you don't have diversity behind the scenes, in the process of creating a story.

Some have said it’s just miscalculated Internet outrage and that there were actually scenes in Wonder Woman when the Amazons were wearing these “skimpier” outfits.

Those are their TRAINING outfits. Not battle outfits.

Those are for training like how now a days women wear sports bras and shorts… but for battle? They had their specific armor.

We’ll have to see on November 17, when Justice League hits theaters, whether Zack Snyder preserves Jenkins’s feminist superhero vision… or whether he reduces it to mere action-fantasy spank bank.