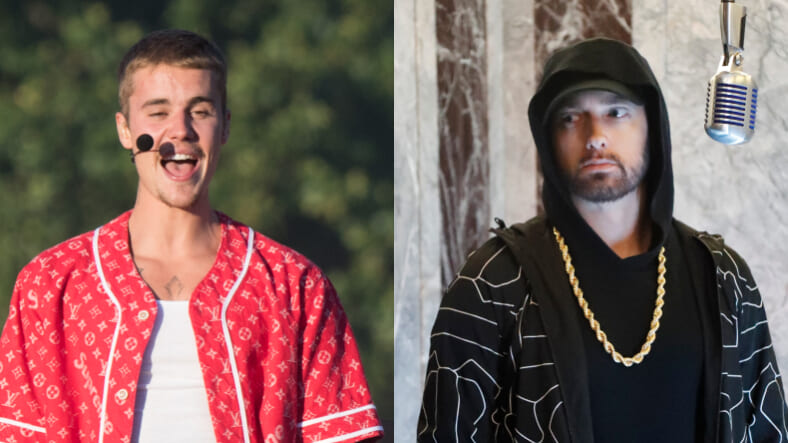 Eminem’s feud with Machine Gun Kelly may have reached a stalemate, but the Detroit-bred rapper now has a new detractor in none other than Justin Bieber.

“I just like Em’s flow but don’t like that he’s dissing new rappers,” he wrote following a screenshot of the album’s opener, “The Ringer.”

“I like the new generation of rap he just doesn’t understand it,” he added.

As Complex notes, the track is largely a critique of today’s so-called “mumble rappers.”

Eminem sniped at newbie hip-hop stars on the track (with a few notable exceptions), rapping, “I heard your mumblin’ but it’s jumbled in mumbo-jumbo / The era that I’m from will pummel you, that’s what it’s comin’ to / What the f*ck you’re gonna do when you run into it? / I’m gonna crumble you and I’ll take a number two / And dump on you, if you ain’t Joyner / If you ain’t Kendrick or Cole or Sean, then you’re a goner.”

Eminem also dissed Tyler, the Creator on “Fall” and MGK on “Not Alike.”

The latter spawned MGK’s “Rap Devil” and then a scathing response from Eminem, “Killshot.”

Bieber himself got a benign shout-out on Eminem’s 11-minute freestyle “Kick Off,” which was released late last year.

“Justin Bieber in a Catholic school/Selling dust and reefer when your back is to him,” Em rapped.

Unfortunately for the Canadian pop star, Twitter users are now roasting him for criticizing Eminem’s understanding of the very genre he’s been a dominant force in for two decades.

OMG Why #JustinBieber can talk about #Eminem ? I thought it was against the law😂😂 @justinbieber @Eminem pic.twitter.com/fUtIjUbV49

@justinbieber I know you will never see this tweet but you criticising @eminem saying he doesn't understand you better go and see his interview with @RealSway and listen the whole kamikaze cause the bars went over your head pic.twitter.com/uj7xJUwoTo

That said, a couple of people did agree with the Biebs’ comments.