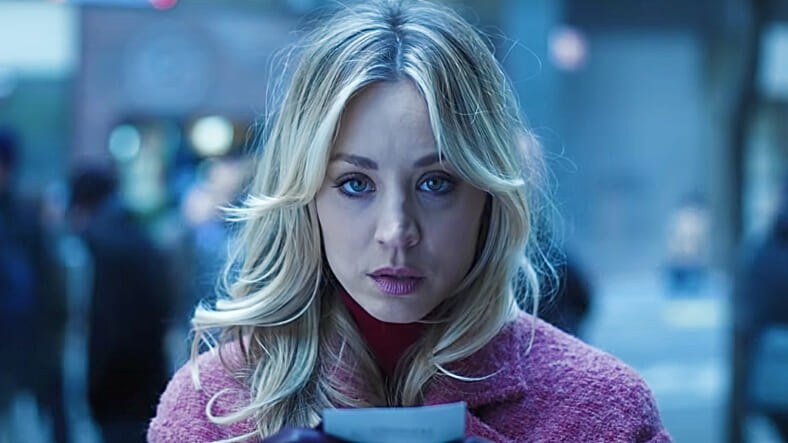 At one point in this new trailer for Kaley Cuoco‘s The Flight Attendant, a man whispers in her ear as she is sitting in an interview, “You think they know you’re lying?”

That man is dead by the time he whispers in the title character’s ear, an apparent figment of her imagination, and that gives you some idea of how intriguing this upcoming HBO Max series could be.

From TV Line, here’s a breakdown of the series plot, which was based on a bestselling novel with the same title:

Based on Chris Bohjalian’s 2018 novel of the same name and described as “a story of how an entire life can change in one night,” The Flight Attendant follows the Big Bang Theory alum’s titular Cassandra Bowden, who wakes up hungover in a Dubai hotel room… with a dead body next to her, and no idea what happened. Instead of informing the police, she joins her fellow crew members on a flight to NYC, where she is met by FBI agents with a few questions about her recent layover. Unable to piece together what happened, Cassandra begins to suspect that she might be the killer.

While Cuoco’s Cassandra is worried she might be a killer, she also says at one point in the trailer that she’s “a crazy, drunk flight attendant—not a killer.”

Sounds like the goal of the series is figuring out if that statement is true or not.

The Flight Attendant was also executive-produced by Cuoco. It begins streaming on HBO Max on November 26, 2020.